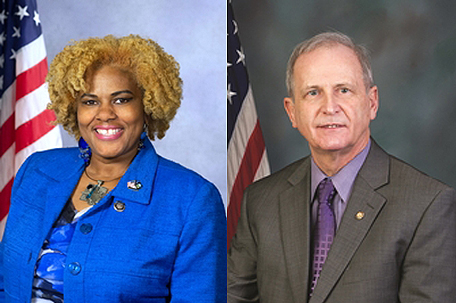 The House Judiciary vote was 13-12, with two GOP members joining Democrats against the effort designed to swing control of the state Supreme Court, where Democrats now hold a 5-2 majority.

The judicial districts would also apply to Superior and Commonwealth courts, which have Republican majorities, but the proposed amendment leaves many of the details to the Legislature to iron out. Those details include how the district lines would be drawn and what will happen to the incumbent judges before or once their current terms expire.

Rep. David Millard (R-Columbia) said he was supportive in part because there have been few appellate judges elected in the rural, less populated portion of the state north of Interstate 80, calling that “a red flag to me that this bill has a lot of merit to it.”

“They’re not supposed to be representing geographical ideologies,” argued the ranking Democrat on the committee, Montgomery County Rep. Tim Briggs. “They’re supposed to be looking at a statewide jurisdiction and interpreting the laws that we pass.”

Democrats lost an effort to have the committee hold a public hearing on the legislation.

Allegheny County Rep. Natalie Mihalek, a Republican, said she was against the proposal, saying it would increase the partisanship of appellate judges rather than elevate those with the right temperament, experience and legal skills.

“I think this is a time when we should be abandoning the practice of politicizing our bench,” she said.

Supporters say that among the 31 Supreme, Superior and Commonwealth court seats, one judge and one justice currently live in the northern part of Pennsylvania.

Of the five Democrats on the state Supreme Court, one is from Philadelphia and four are from the Pittsburgh area. A Republican is from Tioga County, while Chief Justice Thomas Saylor, a Republican who is retiring at the end of the year, lives near Harrisburg.

The Judiciary Committee also advanced to the House floor a constitutional amendment that would temporarily permit lawsuits over child sexual abuse that occurred many years ago. It voted 14-1 to allow a two-year “window” during which people could file civil lawsuits outside the statute of limitations that existed at the time they were victimized.

Rep. Paul Schemel, who cast the lone “no” vote, said statutes of limitations are designed to prevent injustice that can occur when claims are litigated after many years have passed.

“This seems to do justice to victims that seems rightful, however, at the expense of others,” said Schemel (R-Franklin).

Both measures passed both legislative chambers in the 2019-2020 session, so if the full House and the state Senate pass them this year or next they will go on the ballot for voters to consider, perhaps in the May primary.

Also, Republicans on the State Government Committee last Wednesday pushed through on party lines constitutional amendments regarding how a budget surplus is handled, capping how much the state budget can grow from year to year and limiting the governor’s powers during disaster emergencies.

The disaster declaration amendment needs a round of approval by both chambers before it can go before voters. The budget measures are earlier in the constitutional amendment process and would need approval in this session and the 2023-24 term to qualify for a public referendum.

The committee’s top-ranking Democrat, Rep. Margo Davidson, argued the budget rules being proposed do not require the strictures of a constitutional provision.

“There’s nothing constraining us from doing this,” said Davidson of Delaware County. “Just to go back to the voters to ask them to do a job that they have already elected us to do is not something I’m in favor of.”

“Our spending continues to grow at a pace that certainly outpaces the ability of the taxpayer,” said Rep. Dawn Keefer of York, one of two central Pennsylvania Republicans in the closed room who did not wear masks. “We’re shackling people to a number they can’t afford.”