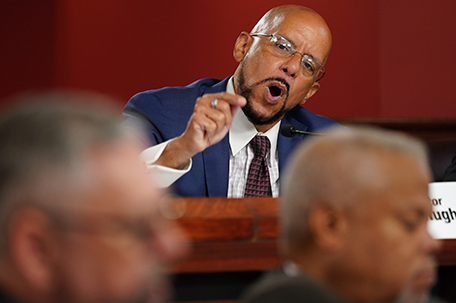 HARRISBURG, Pa.  — Republicans in the Pennsylvania Senate prepared Wednesday to test how far they can go in pursuing what the GOP calls a “forensic investigation” of last year’s presidential election, as Democrats accused them of helping perpetuate the “big lie” of baseless claims that former President Donald Trump was cheated out of victory.

The Republican-controlled Senate Intergovernmental Operations Committee held a party-line vote to issue a subpoena for detailed state election records, including the names of who voted in last year’s presidential election, their birth date, address, driver’s license number, and the last four digits of their Social Security number.

Pennsylvania law prohibits the public release of a voter’s driver’s license number and Social Security number, and Senate Democrats said they will go to court within days to contend that the demand violates the separation of powers and the authority of lawmakers.

It’s not clear whether Democratic Gov. Tom Wolf’s administration will provide the information or can be forced to produce it, even by court order. The Senate subpoena gives a deadline of Oct. 1.

The majority of the information being requested is already available to the public, said Attorney General Josh Shapiro, a Democrat.

But, Shapiro said in a statement, “voters’ private and sensitive information is also being requested. We will do everything within our power to protect Pennsylvanians’ personal data.”

Democratic lawmakers warned that sensitive information on voters could fall into the hands of Trump allies still intent on overturning the election, likening it to the Arizona Senate GOP’s widely discredited and partisan election “audit” that critics say is a fruitless search for fraud to legitimize Trump’s baseless conspiracy theories.

Republicans insist the undertaking has nothing to do with Trump or trying to overturn last year’s presidential election, but rather is about fixing problems in the state’s elections.

During debate in the committee hearing, Democrats questioned who will have access to such sensitive information and why Republicans wanted it.

“Because there have been questions regarding the validity of people who have … voted, whether or not they exist,” said the committee chairperson, Sen. Cris Dush (R-Jefferson). “Again, we’re not responding to proven allegations. We are investigating the allegations to determine whether or not they are factual.”

Asked about those allegations, Dush said he had heard of sworn affidavits of people visiting addresses “that were listed for a voter” and found only a condemned building. Dush could give no other details.

Under questioning by Democrats, Dush suggested that the information will be given to a yet-to-be hired contractor so that lawmakers can “create legislation which will prevent that from happening in future elections.”

The state’s voter registration system contains all the voter data points mentioned in the subpoena or are available by link with the state Department of Transportation, said a spokesperson for Wolf’s Department of State, which oversees how counties administer elections in Pennsylvania.

The idea of election audits or investigations have been propelled by Trump’s most ardent supporters in battleground states where he lost. Still, even as Senate Republicans voted Wednesday to issue the subpoena, Trump’s allies rained down criticism that Senate Republicans are not going far enough and must get ahold of ballots, as was done in Arizona.

Republicans also want to know by what method each person voted, whether in-person or by mail, absentee or provisional ballot, as well as information on when each registered voter last cast a ballot.

In a statement, Wolf, a Democrat, accused Republicans of undermining democracy, capitulating to Trump’s conspiracy theories and perpetuating lies that led to the insurrection at the U.S. Capitol on Jan. 6.

“Senate Republicans would rather cater to the fringe elements of their party who still are perpetuating the Big Lie rather than focus on issues that affect Pennsylvanians’ lives,” Wolf said. Democrats have sharply criticized it, saying the Republicans’ “sham audit,” or “fraudit,” is a stunt to erode the legitimacy of President Joe Biden’s victory and an extension of a national campaign to attack voting rights. Biden beat Trump in Pennsylvania by more than 80,000 votes, according to certified results.