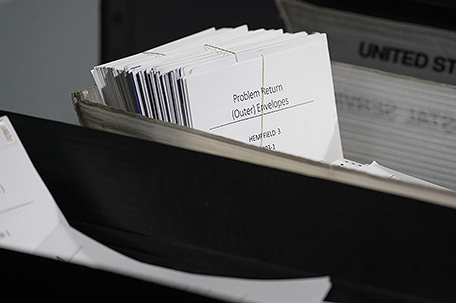 ABOVE PHOTO: A bundle of mail-in ballots marked “Problem Return, (Outer) Envelopes” are set aside as election workers continue counting ballots for the Pennsylvania primary election, Wednesday, May 18, 2022, at the Mercer County Elections Board in Mercer, Pa. Vote counting continues as Republican candidates Dr. Mehmet Oz and David McCormick are locked in a too-early-to-call race for Pennsylvania’s hotly contested Republican nomination for an open U.S. Senate seat. (AP Photo/Keith Srakocic)

HARRISBURG, Pa. (AP) — The state and national Republican parties are suing anew in Pennsylvania in an effort to block some mail-in ballots — those lacking the voter’s handwritten date on the return envelope — from being counted in November, when voters will elect a new governor and U.S. senator.

The GOP’s filing late Sunday went straight to the state Supreme Court, with barely three weeks left before Election Day. The court does not have to take up the lawsuit.

“The time for the Court to act is now,” lawyers for the Republican Party told the justices in the lawsuit.

The effort by Republicans to ensure that improperly dated or undated ballot envelopes are thrown out could help their candidates in tight contests around the state.

As of Friday, nearly 1.2 million voters had applied for a mail-in ballot, with applications from registered Democrats outnumbering Republicans by an almost 4-to-1 ratio. Throwing out undated ballots would theoretically ensure that more Democratic ballots are tossed out, helping Republican candidates.

Wolf’s administration last week told counties that they are expected to include ballots with undated or improperly dated envelopes in their official returns for the Nov. 8 election.

In an email to county officials, a top state elections official wrote that a June state court decision found that “both Pennsylvania and federal law prohibit excluding legal votes because the voter omitted an irrelevant date on the ballot return envelope, and that decision remains good law.”

The new lawsuit is the latest turn in a legal fight over a provision in the state’s 2019 expansive mail-in voting law that Republicans say required voters to date a ballot’s return envelope.

The fight has already reached the U.S. Supreme Court and state Supreme Court, producing conflicting conclusions on narrower issues in each.

Democrats have argued that throwing out a voter’s ballot because it lacks a proper date violates their civil rights, and that the provision is useless anyway because mail-in ballots are supposed to be postmarked and then time-stamped by the county receiving them. They say that the law gives no purpose for the requirement of a date, anyway.

Some Democratic-controlled counties have pushed to count ballots with undated envelopes, and Wolf’s administration, following lower court rulings on the matter, successfully sued to force counties to tabulate them in the May primary.

Even before that, the state Supreme Court, in a 2020 decision, agreed that the Legislature had meant to require that ballot envelopes to be dated — a decision cited by the Republican plaintiffs in the new case.

But the lower court judge in June’s decision, Commonwealth Court Judge Renee Cohn Jubelirer, said the state Supreme Court was not presented with the same arguments that she heard.

In her estimation, “the absence of a handwritten date on the exterior envelope could be considered a ‘minor irregularity’ without a compelling reason that justifies the disenfranchisement of otherwise eligible voters by not counting their timely received ballot,” she wrote.

Last week, the U.S. Supreme Court deemed moot a decision in May by the 3rd U.S. Circuit Court of Appeals that applied to counting the ballots in a Lehigh County judicial race last year. That means the case can’t be cited as precedent.