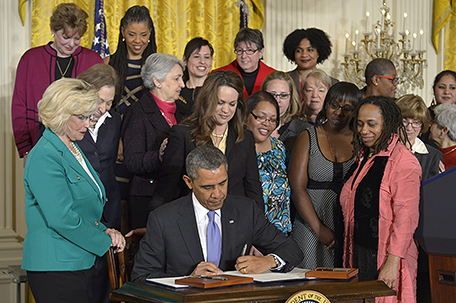 WASHINGTON — Senate Republicans derailed a Democratic bill Wednesday curbing paycheck discrimination against women, an effort that even in defeat Democrats hoped would pay political dividends in this fall’s congressional elections.

Wednesday’s vote was 53-44 to halt GOP tactics aimed at derailing the legislation, but that fell seven short of the 60 votes Democrats needed to prevail.

The outcome on the Senate floor was not a surprise, but Democrats were playing to a wider audience.

With public opinion polls showing Democratic voters less enthusiastic than Republicans this year, Democrats aimed the measure at women, who historically lean more toward their party than men. They were also casting the issue as a crucial one for the middle class because so many families rely on female wage-earners – and promised to revisit it before Election Day.

“I want everyone to know, everyone in the Senate and everyone in the United States of America, though we lost the vote, we refuse to lose the battle. We are going to continue the fight,” said Sen. Barbara Mikulski, D-Md., the measure’s sponsor.

Wednesday’s bill was the latest in a campaign-year parade of measures Democrats hope will drive sympathetic voters to the polls this November. Others include proposals to extend expired unemployment benefits, raise the minimum wage and make student loans more affordable.

This is the third consecutive election year in which Senate Democrats have pushed the bill making it harder for employers to pay women less than men in comparable jobs – and easier for aggrieved workers to sue. Republicans have shot it down each time.

Every voting Republican voted to block the bill. They were joined by Sen. Angus King, I-Maine, who normally sides with Democrats.

Reid switched his vote to “no” to give himself the procedural ability to quickly call up the measure for a future vote, which Democrats have pledged to do.

Reid’s GOP counterpart faulted him for blocking Republican proposals that would cut taxes, allow more flexibility for workers’ hours and take other steps they said would protect jobs and help employees. The Democratic bill would open the door for frivolous, expensive workers’ lawsuits against companies, Republicans say.

The battle was suffused with the politics of an election year in which Republicans could capture Senate control and are expected to retain their hold on the House.

Republicans, with strong backing from the U.S. Chamber of Commerce and other business groups, said the measure would tie the hands of employers.

Joined by Democratic lawmakers and Lilly Ledbetter at the White House, President Barack Obama took a swipe at the GOP on Tuesday. Ledbetter’s claims of pay inequity by her employer led to the 2009 anti-discrimination statute bearing her name, the first bill Obama signed as president.

“Republicans in Congress have been gumming up the works,” said Obama, adding later: “America, you don’t have to sit still. You can make sure that you’re putting some pressure on members of Congress about this issue.”

Republicans said the bill would make it hard for companies to award merit pay or offer flexible work hours in exchange for lower pay and expose employers to costly, frivolous lawsuits.

McConnell cited statistics showing how women’s income has fallen and their poverty rate increased under Obama.

“It’s important to kind of put in place the record of the current administration with regard to women,” McConnell said. Obama took office during the worst recession since the Great Depression of the 1930s.

As if to underscore the political sensitivity of the debate, McConnell held his usual Tuesday session with reporters accompanied only by Sen. Deb Fischer, R-Neb., who was pushing a narrower version of the legislation. Typically, McConnell faces the cameras joined by the top members of the Senate GOP leadership, who are all men.

At almost the same time, a parade of Democratic female senators trooped to the Senate floor to defend the bill.

The bill would narrow the factors businesses can cite for paying women less than men in the same jobs, and bar employers from retaliating against workers who share salary information. It also would make it easier to bring class-action lawsuits against companies and let victors in such lawsuits win punitive and compensatory damages.

Paycheck discrimination based on gender has been illegal since the 1960s. The Ledbetter law extended the time people have to file lawsuits claiming violations of that law.

Women averaged 77 percent of men’s earnings in 2012, according to Census Bureau figures. That is better than the 61 percent differential of 1960, but little changed since 2001.

Data shows that men tend to out-earn women at every level of education and in comparable jobs.

Yet women generally work shorter hours and are likelier to take lower-paying jobs. Sixty-two percent of the 3.3 million workers earning at or below the minimum wage last year were women, according to the federal Bureau of Labor Statistics.

Even if the Democratic bill emerges from the Senate, it appears to have little chance in the GOP-run House.