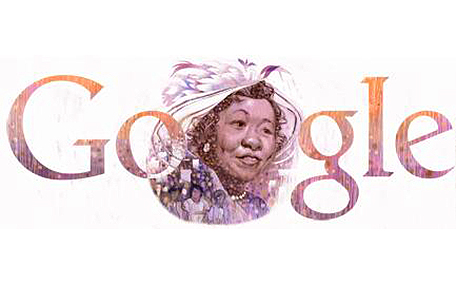 A portrait of Dorothy Irene Height appeared as the daily Google doodle Tuesday, celebrating the civil and women’s rights activist on the 102nd anniversary of her birth.

When she passed away four years ago, President Barack Obama referred to her as “the godmother of the civil rights movement and a hero to so many Americans.” The Washington Post further quoted the president as saying Height (1912-2010) “devoted her life to those struggling for equality … witnessing every march and milestone along the way.”

Height, leader of the National Council of Negro Women for four decades, has been credited with bridging the gap between the civil rights and feminist movements, Entertainment Weekly wrote. During her lifetime she received the Presidential Medal of Freedom in 1994 and the Congressional Gold Medal in 2004.

At the 1963 March on Washington for Jobs and Freedom, Height she sat on stage at the Lincoln Memorial behind DR. Martin Luther King Jr. when he delivered his famous “I Have A Dream” speech.

Height’s career as an activist almost never took off after she was kicked out of college. In 1929, Barnard College in New York had an unwritten rule that said only two African American students could be admitted per year and Height was shown the door.

But she didn’t let that stop her. The New York Times noted that she took her Barnard acceptance letter to New York University, where she was accepted, and went on to graduate with a bachelor’s degree in education and then went on to earn a master’s in psychology two years later in 1935.