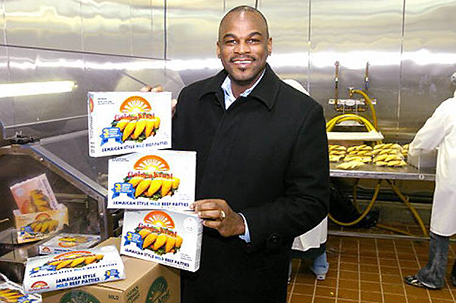 NEW YORK — Lowell Hawthorne, the founder and CEO of Golden Krust Caribbean Bakery and Grill, has died in New York City. He was 57.

The city’s medical examiner’s said Hawthorne shot himself in the head at his Bronx factory on Saturday.

Hawthorne started the successful Caribbean fast food chain in 1989 by selling Jamaican beef patties, jerk chicken and breads. He built the business into a national franchise with more than 120 restaurants in nine states.

Hawthorne once appeared in an episode of CBS’ “Undercover Boss.” At the time of his death his company was planning on building a new $37 million headquarters in Rockland County.

“He was a nice boss, a wonderful guy,” longtime employee Everald Woods told the Daily News. “He’s the kind of guy you want to work for for that long. He takes care of his employees.”

The New York Post reported that the founder of the Golden Krust Jamaican beef patty empire killed himself amid fears the feds were investigating him for evading millions of dollars in taxes.

A family member told detectives that Lowell Hawthorne, 57, admitted the huge tax debt to some of his relatives, and was “acting funny” and “talking to himself” in the hours before his suicide, a law enforcement source said Sunday.

A Nov. 28 post, written in an ominous past tense, reflected on his life. “I was always in search of the next honest means to make a dollar,” Hawthorne wrote. “Like many transplanted Caribbean nationals, I struggled to work and raise a family. I can only thank God for everything I have achieved….If my story here can inspire others to rise up and give it a go, I would have accomplished something meaningful.”

In a Twitter message on Saturday, Jamaican Prime Minister Andrew Holness offered his condolences to Hawthorn’s family and employees.