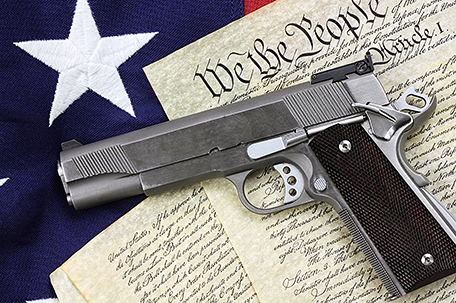 HB 60, which the Senate voted to approve last week, would grant churches the right to decide whether they want people carrying guns on church property. Under current law, guns are prohibited in churches, even if the church leaders are OK with congregants toting guns in the sanctuary.

The bill also allows school boards to designate staff members other than police officers to carry guns in K-12 schools.

“It says, ‘Hey, if you don’t have the resources to pay somebody 60 to 80 grand a year to protect your schools then y’all can delegate members of your team that have a legal permit to carry while they are conducting their school duties in an effort to be the first line of defense if there is a nut job that wants to come and shoot our school children and not have to wait the five minutes or 10 minutes for the local SWAT team to get there,’” Hill said. “There’s somebody there that can react.”

Another change the bill would make concerns people who mistakenly bring a gun to the airport. In 2012, for example, Cobb Chamber of Commerce President David Connell was on a trip to Baltimore with Atlanta Mayor Kasim Reed and others and passed through the security checkpoint at Hartsfield-Jackson Atlanta International Airport with a handgun in his briefcase. Connell said he didn’t realize the gun was left in his brief case, but he was arrested all the same and spent about seven hours in jail.

Under HB 60, Connell would not have gone to jail, Hill said.

“He would get reprimanded there, but when he’s shown to have his legal permit he would be able to leave to go back to his car to put it in his car,” Hill said. “In other words, the system worked, we caught you, we know you didn’t have malicious intent, or at least we didn’t think you did, you’re a law-abiding citizen and you have a legal permit to carry the weapon, but obviously we’re not going to let you carry this on the plane in a carry-on bag, but we’re also not going to throw you in jail, so it just adds a little common sense to the program and it’s a good measure.”

The House now has the option to approve the bill, at which point it heads to Gov. Deal for his signature or it could go to a conference committee where three senators and three House members would hammer out a consensus bill.

“What I think will happen is it will go to conference,” Hill said.

State Sen. Steve Thompson (D-Marietta), who voted against the bill, said if it does go to conference committee, the end result is anyone’s guess.

“As lively as it is getting, it’s a 24-page bill, so if we get a conference committee report we need to look at that thing for a while,” Thompson said. “We need to know what’s in it. Being expeditious is a good thing, but if you don’t have time enough for someone to understand it and ask questions that need to be asked, then it doesn’t serve you.”

The bill would scratch the law that denies a gun permit to someone convicted of aiming a gun at someone else. Hill said he hopes the conference committee kills that part of the bill.

“I believe that’s irresponsible,” Hill said. “It’s totally legal to have a gun in your home and defend your home. But if you want to carry out in the public, that’s what we regulate in the state.”

Hill also believes bar owners should have the right to decide if their customers are armed or not, as a matter of property rights, which is why he dislikes the provision lifting the ban on bars.

Thompson said he’s not opposed to guns. He owns seven of them.

“But sometimes you take it too far,” Thompson said. “And I think they have. I cannot see legalizing the possession of guns and encouraging by law for guns and alcohol to mix in a bar. I just can’t do it. I mean, I’m not a snob. I’m not afraid to go into a bar. I’m not afraid to have a beer, but I know that alcohol and sometimes people don’t mix, and it’s not a good idea for those things to be handy and readily available to people who might not have control of their temper or may suffer from some other anxiety.”

Thompson also questions the provision he says would allow hunters to use a silencer on a deer rifle.

“I’ve been deer hunting before and I kind of want to know where those people are,” he said.

Thompson believes the bill is being driven by the National Rifle Association and young lobbyists eager for a paycheck.

“To be honest with you, I think it’s young lobbyists that if they don’t have an issue the next year they’ve got to justify their existence,” Thompson said. “The other side of it is it’s a paranoia that’s in this country, a Second Amendment paranoia that people are going to take their guns away, which is not been the case. Assault weapons have only been the thing that people are concerned about.”

Of the six senators who represent Cobb the vote broke down along party lines, with Democrats Thompson and Horacena Tate (D-Atlanta) voting against the gun bill and Republicans in favor. Besides Hill, the other GOP lawmakers are Lindsey Tippins (R-west Cobb), Bruce Thompson (R-White) and Judson Hill (R-east Cobb).