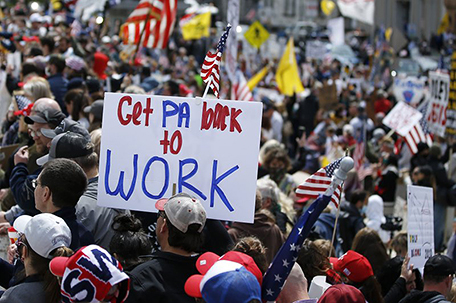 Some regions of Pennsylvania are tantalizingly close to escaping some pandemic restrictions. Other parts of the state could have a long way to go before residents and businesses begin getting back to normal.

As the administration of Gov. Tom Wolf considers when to allow residents to leave their homes and shuttered businesses to reopen, an analysis by The Associated Press shows how the state’s sprawling geography and highly variable population density are playing a big role in the shutdown calculus.

Wolf says a swath of rural northern Pennsylvania — spanning some 230 miles from east to west — is set to begin moving out from under his shutdown orders on May 8. That is partly based on a metric in the state’s reopening plan that says new infections of the coronavirus must total no more than 50 for every 100,000 residents over a two-week period.

In the southeast, which includes Philadelphia and its tightly packed suburbs, residents are still contracting the virus at a rate nearly five times above the state’s threshold to be considered for shutdown relief. And the northeast region, which includes Allentown, Scranton and Wilkes-Barre, is still four times over the state threshold.

Wolf’s gradual, color-coded reopening plan divides Pennsylvania’s 67 counties into six geographic regions. All of Pennsylvania has been at “red,” meaning all 12.8 million residents are under orders to stay home and all businesses deemed “non-life-sustaining” are closed to help contain the virus, which has infected more than 38,000 people and killed more than 1,400 statewide.

Under Wolf’s plan, individual regions will move from red to the less restrictive yellow, and then, eventually, to green, meaning that all pandemic shutdown orders are lifted except to the extent that federal or state health guidelines remain in place to limit the virus’s spread.

Wolf has acknowledged the southeast region will likely be the last to move from red to yellow. Neither Wolf nor his health secretary could say when the southeast’s 5.2 million residents might see shutdown relief.

The capital region of south-central Pennsylvania, meanwhile, is fairly close to meeting the case threshold, at about 74 new infections reported per 100,000 people over the past two weeks.

In the southwest, which includes Pittsburgh, only about 31 additional people per 100,000 were reported to have contracted the virus in the latest 14-day period. But the region includes a county on the Ohio border, Beaver, which is dealing with a large outbreak at a nursing home that has spiked its overall infection rate. Health officials say they’re taking that special circumstance into account as they decide whether the Pittsburgh area is ready to begin reopening.

Officials say the incidence of new cases isn’t the only metric they’re looking at.

Expanded virus testing, sufficient hospital capacity and the ability to quickly identify and contain flareups through what’s known as contact tracing must also be in place. The state Department of Health will also use a new modeling tool by Carnegie Mellon University to help officials decide when a region is ready to reopen. The virus math “is just one piece of the puzzle,” Dr. Rachel Levine, the health secretary, said Friday.

Republicans are pressing Wolf, a Democrat, to reopen the state’s battered economy more quickly and broadly. U.S. Sen. Pat Toomey, a Pennsylvania Republican, released a plan that says most of the state should immediately resume some economic activity. Nearly 1.6 million Pennsylvanians have filed for unemployment compensation since mid-March. Wolf acknowledged that a decision on when to allow a region to reopen is both art and science, with a high degree of uncertainty thrown in.

“I’m trying to do this in a logical, reasoned, sequential, cadenced way, but recognizing that ultimately there’s going to be a measure of subjectivity to this whole thing,” he said.

All of Pennsylvania poised for at least a partial reopening