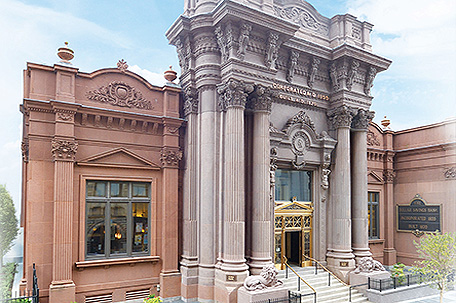 Standing in a room with black and white marble floors, white marble counters, a ceiling adorned by a circle of winged cherubs and a chandelier must have made an impression on the young man.

He worked as a waiter at Youngson’s, a popular Smithfield Street restaurant.

Before that, he had been a slave.

The South Carolina native had survived bondage, eluded Civil War bullets as a teen-aged valet to a Confederate captain, then slipped through Union Army lines when Southern rebels retreated from a bloodbath called Antietam. He journeyed west to Pittsburgh. After freedom, saving money was another key step for Thomas in starting a new life. On July 15, 1872, he signed his name in a ledger, opening a savings account at one of few places in Pittsburgh that welcomed Black customers — Dollar Savings Bank.

His story, and thousands of others, are written in flowing signatures in hundreds of the bank’s deposit, mortgage and signature ledgers. Kept for nearly two centuries, the records show that starting in 1855, generations of African-Americans plus immigrants from 30 countries became customers and continued banking there into the early 1920s.

Normally stored in Armstrong County, the ledgers were to be exhibited last Saturday at Dollar Bank’s Heritage Center when Doors Open Pittsburgh held a four-hour tour of key local sites on the Underground Railroad. (The tour was sold out.) Biographical details about new depositors were obtained by bank tellers who were usually white men from respected Pittsburgh families. To ensure account security, tellers noted a new customer’s age, occupation, street address and place of birth, creating a trove of information for future researchers. If new depositors could not sign their name, tellers asked their grandmother’s maiden name or the name of the county they came from in Ireland.

All a new depositor needed to open a savings account was $1, or roughly a day’s wages in 1855, the year the bank opened.

“Your race, creed, sex or nationality did not matter,” said Dorothy Spangler, multi-media production specialist for the bank.

The bank’s depositors included laborers, merchants, sailors or tailors; a large number were women. Bank president W.W. Speer told a local reporter in 1896 that the bank was “a trustee for the poorer classes of Pittsburg.” Customers earned 6% interest annually.

Sometimes, a new customer would tell a bank teller that he or she was a former slave. Nearly 40% of African-Americans who opened accounts at the bank before 1900, Spangler said, came from Virginia, including a group from Winchester, located in the state’s northernmost county.

Pittsburgh’s location — 50 miles above the Mason-Dixon Line — which divided free northern states from slave-holding, southern states, attracted people fleeing a lifetime of bondage. Most slaves walked thousands of miles to cross that boundary while some came by steamboat because the Monongahela River flows north.

By 1867, Thomas was working as a hotel porter in Pittsburgh but waiting tables at Youngson’s paid better. In the mid-1870s, Thomas was recruited to join the Jubilee Singers, a famous choir of former slaves. Proceeds from the choir’s performances of spirituals raised money to build Jubilee Hall, a National Register landmark that still stands at Fisk University, a historically Black school in Nashville.

By 1881, bank records show, Thomas lived at 6 Townsend St. in the Lower Hill District and listed his occupation as vocalist.

An ardent abolitionist, businessman, minister and educator, Woodson was born free. He guided fugitive slaves to safety on the Underground Railroad, a network of secret routes, meeting places and safe houses that nearly 100,000 people used to escape slavery.

Woodson was 52 when he opened a Dollar Bank savings account in 1857, listing his occupation as barber and giving his address as Fourth Street. A teller noted that he was biracial and of medium height.

Woodson worked closely with three other prominent Black leaders — John Vashon, John Peck and Martin Delany — all of whom operated businesses in or near Downtown’s Market Square.

One of Pittsburgh’s wealthiest Black men, Vashon owned the city’s first public bath house at No. 37 and No 39 on Third Street, where men and women bathed separately, on different levels of the building. At night, the City Baths, as it was advertised, served as a stop on the Underground Railroad. A barber and minister, Peck owned a clothing store and oyster house; his business at No. 65 Fifth Street sold French perfume and wigs for men and women. He used his skills and merchandise to provide new clothes, haircuts and disguises for slaves heading north to Canada.

A fiery orator, Delany published “The Mystery,” an abolitionist newspaper.

Some of Dollar Bank’s customers were among the 300 African American employees who cleaned rooms or waited tables at Downtown’s splendid 210-room Monongahela House, razed in 1935. One night in February 1861, the hotel hosted President-elect Abraham Lincoln, whose train stopped here while en route to the nation’s capital for Lincoln’s March inauguration.

John McDonald Crossan, owner of the Monongahela House, often aided his employees in guiding fugitive slaves to freedom on the Underground Railroad. Another stop on Saturday’s Doors Open Pittsburgh Underground Railroad tour was to be the Mt. Washington home of Thomas J. Bigham, a Pittsburgh lawyer, state representative and senator who lived at “Woodlawn,” a Greek Revival mansion that still stands in Chatham Village, where it serves as a community space.

Bigham supported the abolition of slavery and kept a lantern burning outside Woodlawn at night, a sign that fugitive slaves could find shelter there.

Bigham family papers record that the family employed servants, including a Black nurse named Lucinda Bryant, born in 1825. She never left the house during the day and if a stranger was seen on the property, fled to an attic bedroom.

“She could have been a fugitive slave herself,” said Samuel W. Black, director of African-American programs at the Heinz History Center.

Dollar Bank rediscovered its history in 2010 when Ernest Jackson, then the bank’s head of records management, did not want to pay a bill. He asked what the bank was paying to store at a building in Green Tree.

When he learned it was a lot of books from the 1800s, Spangler recalled, “He emailed several of us who were interested in the bank’s history and said let’s go down and investigate. We cut open the plastic on the pallets and started taking the books out one by one and realized what we had.”

Since 2017, the bank has used its archives to relate stories of its customers during events it holds in February, which is Black History Month.

Spangler chose those two groups because the number of depositors in each — thousands instead of hundreds of thousands — could be researched more quickly.

Robert Presutti, the bank’s archivist, manages the records; Spangler has spent some of the past six years discovering the names and stories of the people whose slow, steady saving habit helped them prosper in a new country.