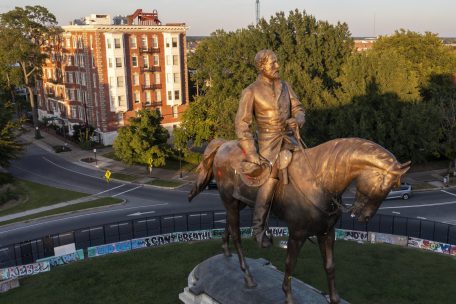 By SARAH RANKIN and DENISE LAVOIE

RICHMOND, Va. (AP) — A statue of Gen. Robert E. Lee that towered over Richmond for generations was taken down, cut into pieces and hauled away Wednesday, as the former capital of the Confederacy erased the last of the Civil War figures that once defined its most prominent thoroughfare.

Hundreds of onlookers erupted in cheers and song as the 21-foot-tall bronze figure was lifted off a pedestal and lowered to the ground. The removal marked a major victory for civil rights activists, whose previous calls to dismantle the statues had been steadfastly rebuked by city and state officials alike.

“It’s very difficult to imagine, certainly, even two years ago that the statues on Monument Avenue would actually be removed,” said Ana Edwards, a community activist and founding member of the Virginia Defenders for Freedom Justice & Equality. “It’s representative of the fact that we’re sort of peeling back the layers of injustice that Black people and people of color have experienced when governed by white supremacist policies for so long.”

Democratic Gov. Ralph Northam ordered the statue’s removal last summer amid the nationwide protest movement that erupted after the murder of George Floyd by a police officer in Minneapolis. But litigation tied up his plans until the state Supreme Court cleared the way last week.ADVERTISEMENT

Northam, who watched the work, called it “hopefully a new day, a new era in Virginia.”

“Any remnant like this that glorifies the lost cause of the Civil War, it needs to come down,” he said.

The 21-foot (6-meter) bronze sculpture was installed in 1890 atop a granite pedestal about twice that tall. The sculpture was perched in the middle of a state-owned traffic circle, and it stood among four other massive Confederate statues that were removed by the city last summer.