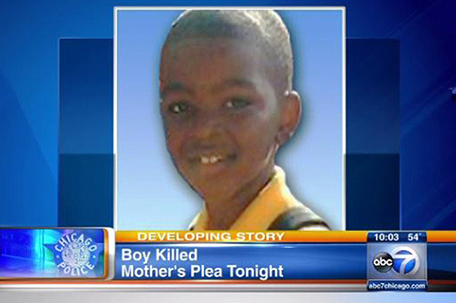 The murder of a 9-year-old boy in Chicago has been solved after police arrested four gang members connected to the fatal shooting.

Antonio Smith was the city’s youngest victim lost to gun violence, one that could have been prevented, says Superintendent Garry McCarthy.

The gunman, Derrick Allmon, 19, told authorities that he thought the boy shouted a warning to rival gangbangers, according to  the Chicago Tribune.

Police say Antonio was not in a gang, but that he lived in a neighborhood controlled by the Pocket Town faction, a rival to the Sircon City faction of the Gangster Disciples street gang.

Also arrested for their part in Antonio’s murder were Jabari Williams, 22, who gave Allmon the gun and instructions to kill two rivals, Paris Denard, 19, and Michael Baker, 19.

McCarthy said Allmon, the shooter, should have never been on the streets after being convicted on weapons charges..

“He should not have been on the street to commit this murder,” McCarthy said of Allmon, who was on parole.. “The real kicker to this entire case is that it didn’t have to happen.”

“Chicago’s murder problem is a gun problem. It’s too easy to get a firearm,” he added.

Antonio, affectionately called Fat Baby or Hamburger, was a fourth grader whom loved ones say loved to smile and dance to Michael Jackson songs. The boy was an honor roll student and was so smart he could “sell water to a whale,” according to his obituary.