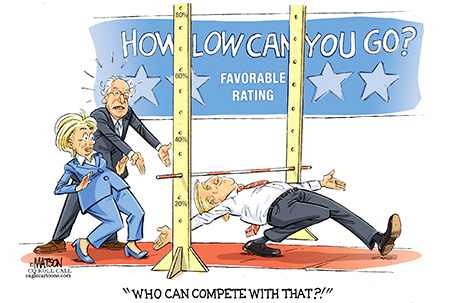 By Lisa Lerer and Ken Thomas

WASHINGTON — When is a gaffe not a gaffe? When Donald Trump says it.

Over a period of 72 hours earlier in the month, the Republican front-runner faced a campaign crisis after unrest at his events forced him to cancel a rally in Chicago. He responded, not by apologizing but by justifying his supporters’ violent reactions to protesters at his events and offering to pay legal fees.

Meanwhile, Hillary Clinton spent much of the same period cleaning up misstatements about former first lady Nancy Reagan’s role in addressing the AIDS epidemic, whether her policies would kill coal-mining jobs and her husband’s 1993 health care plan.

The three-day window offered a glimpse into an extraordinary campaign cycle, in which strategists on both sides are wondering whether Trump’s penchant for provocation has shifted the gaffe gauge in American politics.

His bombast already has shaken up the Republican primary contest. Now, as the race moves toward the general election, new questions have arisen about a double standard in political rhetoric — one for Trump and another for everyone else.

“Trump’s ‘gaffes’ haven’t hurt him because a certain segment of GOP primary voters actually support the things he is saying and the way he is saying them,” said Dan Pfeiffer, a former Obama adviser.

Mike DuHaime, a Republican strategist and former adviser to New Jersey Gov. Chris Christie’s presidential campaign, says that the image Trump projects as a political outsider has superseded the controversy that surrounds him. Christie has endorsed Trump.

Whether by mistake or intention, there’s little question that Trump’s eruptions are key to his strategy.

Trump canceled a scheduled event on March 11 at the University of Illinois at Chicago, one of the country’s most diverse campuses, despite a flood of incensed responses.

The result was a chaotic and violent scene after which Trump dominated the airwaves, starving his rivals for coverage in the run-up to the critical March 15 primaries.

The only time Clinton broke through the clutter was when she talked about Trump, a situation that wasn’t lost on Democrats who noted his ability to stay on the offensive throughout the GOP primaries. But party strategists and Clinton aides believe that calculus will change in the general election, pointing to Trump’s high negative ratings.

“Trump’s statements, while they play very well with Republican primary voters, they’ve turned off the vast majority of Americans,” said Democratic pollster Mark Mellman, who is not advising Clinton’s campaign.

Democrats have already begun stockpiling potential ammunition about the billionaire and are planning a coordinated effort to undercut his appeal.

“Republicans have utterly failed to police their own ranks,” said David Brock, a Clinton ally who oversees multiple Democratic super PACs. “Should he get the nomination, I think progressives will be able to hold his feet to the fire in a way that Republicans never would.”

Early efforts spilled out into the public this week when a Democratic group backing Clinton blasted out footage of Trump refusing to name his foreign policy advisers and instead cited his own “very good brain.”

“Is this who we want,” asked Priorities USA, a super PAC backing Clinton’s bid, and quickly spliced the interview into an online video.

That’s a strategy they used in 2012, when Democrats seized on a leaked video showing Republican nominee Mitt Romney at a private fundraiser in Florida dismissing “47 percent” of voters as backing President Barack Obama because they are “dependent on government.” That comment helped Democrats paint Romney as a heartless plutocrat only concerned about protecting the wealthy.

“It fit perfectly with the narrative our campaign was telling about him, and it was one that voters found very believable about him,” said Pfeiffer.

Other candidates haven’t been nearly as immune.

Arizona Sen. John McCain was trailed by a comment he made in September 2008, hours before investment bank Lehman Brothers filed for bankruptcy, when he said: “The fundamentals of the economy are strong.” In that same election, Clinton seized on comments then-Illinois Sen. Barack Obama made in a San Francisco fundraiser describing some small-town Pennsylvania voters as “bitter,” saying they “cling to guns or religion.”

In those cases, the screw-ups trailed them for days – if not years. But rather than try and clean up his commentary, Trump typically stands by his words and has yet to suffer any consequences in the primaries.

A new Trump campaign ad introducing the candidate to Arizona voters leaves little doubt that he’s embraced many of his most provocative statements as he turns toward the general election. The commercial rattles off Trump’s promises to ban Muslims from entering the U.S., build a wall on the Mexican border and “take” oil from the Islamic State group.

Republican strategist Danny Diaz, Jeb Bush’s former campaign manager, believes Trump will be subject to more scrutiny in the general election. But he isn’t sure how much it will matter.

“If I were the Democrats, yeah, I’d be worried,” he said. “He doesn’t feel constrained by the regular rules of the road. From a cultural perspective, he’s something that we haven’t seen before.”