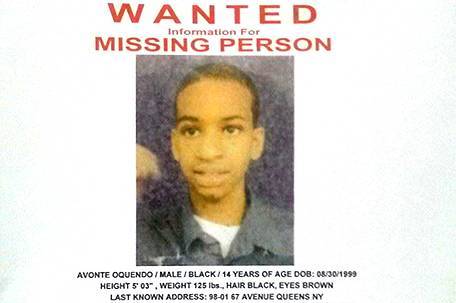 NEW YORK — Strangers who helped try to find an autistic New York City teen who walked out of his school and disappeared joined his family and friends last Saturday for his funeral, somberly marking the tragic end of their three-month search.

The former Roman Catholic archbishop of New York, Cardinal Edward Egan, presided over the ceremony at the Church of Saint Joseph as 14-year-old Avonte Oquendo’s parents and brothers sat stoically in a front pew, next to a white casket holding the remains pulled from the East River last week.

“This morning we are grateful to God for Avonte Oquendo, for his life, for his courage, and for the acts of goodness and kindness that his life and his tragic disappearance evoked among us,” Egan said. “We know that he is safely in the embrace of the father in heaven and we thank that father in heaven for the years we had with him in our midst.”

Oquendo, who had a form of autism that made him nonverbal, had been missing since Oct. 4, when he walked out of his school toward a park overlooking the river. His remains were found about 11 miles from where he vanished after a massive citywide search that included extensive searches of subway tunnels and regular announcements over the PA system at subway stations.

Many of the volunteers who handed out flyers with his picture on them and helped the search effort arrived at the church Saturday to pay their respects.

Osmaira Maldonado, 28, attended the funeral with her four-year-old son Justin Hardy and introduced herself to Avonte’s mother, Vanessa Fontaine, after the service to pass along her condolences.

“I guess it’s just a mother thing,” she said tearfully outside the church. “It’s so tragic I didn’t know what else to say.”

A funeral home covered the costs of the funeral and a family-only wake beforehand, where about a hundred relatives sat together in a room full of white flowers watching a slideshow of the teen’s photos.

“Nobody really wanted to speak,” said Roberto Colon, 49, whose wife’s cousin is Avonte’s mother. “We couldn’t fathom what to say.”

Investigators are still trying to determine how Avonte died and further tests are needed to determine the cause and manner of death, officials have said.

The family’s lawyer, David Perecman, filed a notice of claim in October, the first step in suing the city, and has publically listed a number of mistakes he alleges contributed to the boy’s disappearance and what he has described as a flawed search effort.

The city’s law department has called the boy’s death a tragedy and said its attorneys will review a lawsuit when it’s filed.

Margaret Coaxume, who didn’t know Avonte or his family, brought her 15-year-old autistic son Elijah Thompson to the funeral because, she said, like so many she had closely followed the heartbreaking story of Avonte’s disappearance and death.

“It’s a tragedy,” she said, as mourners placed white roses on the casket inside a hearse that was to take Avonte’s body to a crematorium after the service. “My heart is heavy.”