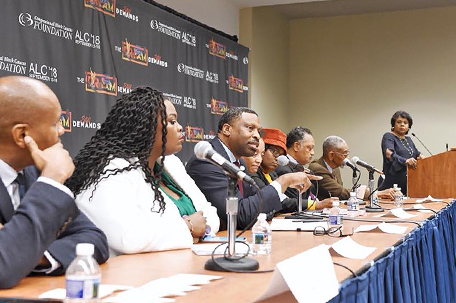 For the Black community, the press and its function are more important during the Age of Trump than it’s ever been.

It’s hard for everyone in general, and journalists in particular, not to be distracted by what comes out of the smartphone of The Tweeter-In-Chief.

But for journalists covering the White House that serve communities of color, it’s important to put the Twitter missives of President Donald Trump into perspective and continue to dig for the truth and report the news, no matter how hostile he, and his supporters, may make the environment.

How Black journalists in particular are handling the new dynamic of covering the White House of someone who wants to make writing something he doesn’t like an offense that lands you in court was the subject of a gathering at last week’s Congressional Black Caucus Foundation Annual  Leadership Conference. Congresswoman Yvette Clarke from New York’s Ninth District assembled a panel of White House correspondents to talk about their experiences covering a White House unlike any other.

People from marginalized communities rely on a vibrant press to protect them from a government that has often done its worst to them. Because of this, it’s important for the Black community to be as strident of a defender of the First Amendment as possible, Clarke said, especially at a time when the person overseeing the country has no respect for that particular constitutional amendment.

“The Fourth Estate, which is so important to uncovering truth and in maintaining the norms under which we view ourselves as a democracy and as a people is being eroded,” she said. “We have to create a space for the First Amendment because without it, we’re going down a horrible road and the Black community can least afford to allow that to happen. If any group of people is going to maintain our democracy, and save our country’s soul, it’s going to be us.”

To begin that conversation, Tiffany Cross, co-founder of The Beat DC, a daily political news site that focuses on people of color making policy in Washington, interviewed a reporter who is in the middle of the action every day, April Ryan, DC bureau chief for American Urban Radio Networks, CNN contributor, and author of the book “Under Fire: Reporting From The Front Lines Of The Trump White House.”

Ryan has been covering the White House for 21 years, and says she’s proud to be a member of the White House Press Corps. That said, she says, the press corps has changed, and not necessarily for the better.

“The relationship between reporters and the White House has always been adversarial,” Ryan said. “But now, newsrooms are divided. During the [President Bill] Clinton years, we were all a hypersensitive group thinking as one. We also didn’t see this distance during the [President Barack Obama] years. But now, there’s a liberal reporting group, a conservative reporting group, and a group that sees itself as in the middle like [legendary CBS News anchor] Walter Cronkite and says ‘I want the truth. Don’t give me the slant.”

“There’s also people in the press room who aren’t actually reporters,” Ryan continued. “Internet trolls have been given press access. If that had happened during the Obama years, all hell would have broken loose. So when you’re watching a press conference, take a look and see the faces there. Some of them come from podcasts and try to challenge me and I tell them to sit down.”

It’s also not the easiest White House from which to access information, Ryan said. White House briefings have been few and far between, while some reporters, most notably Michael Wolfe, editor of the book “Fire and Fury”, can just sit and chat with people without attracting much attention.

That said, Ryan has managed to cultivate the kinds of sources within this administration to help her inform her readers and listeners.

“This White House is very complicated,” she said. “Sarah Huckabee Sanders and I don’t have a relationship, but I have a high placed source that’s close to the president and because I have some influence in their eyes, they call me in and talk to me about things like prison reform even after they’ve gone on Fox News and talked about me. They hate me, have berated me for all the world to see, but they know I have an audience. I have better Republican sources than I do Democratic ones. It’s interesting.”

That said, Ryan has been a target of the administration’s worse impulses when it comes to the press. While she was in New Orleans receiving the Journalist of the Year Award from the National Association of Black Journalists for her ability to continue reporting in the face of mounting pressures, she got a text message from a friend that let her know how the Trump campaign viewed her.

“I was asked if I had seen the campaign ad because I was in it,” she said. “It was me, Don Lemon, Chris Matthews, and Rachel Maddow in this ad approved by the President of the United States that had all of us reporters accused of thwarting the Trump agenda. I’m just asking questions for an underserved community that has the highest number of negatives in every category. I’m still doing my job, but I’m a public enemy now.”

Following the talk with Ryan, there was a panel featuring a group of political journalists who talked about everything from the importance of self-care for journalists and how to handle covering the White House without getting drowned out in the minutia.