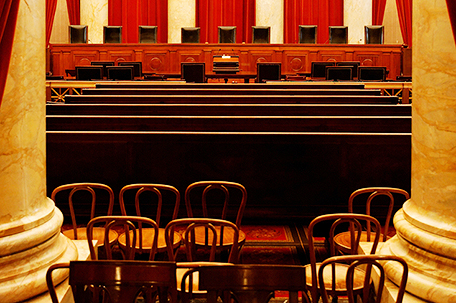 WASHINGTON — The religious rights of corporations, the speech rights of abortion protesters and the privacy rights of people under arrest are among the big issues still unresolved at the Supreme Court.

Summer travel, European teaching gigs and relaxation beckon, but only after the court hands down decisions in all the cases it has heard since October.

In rare instances, the justices will put off decisions and order a case to be argued again in the next term.

This is also the time of the year when a justice could announce a retirement. But the oldest of the justices, 81-year-old Ruth Bader Ginsburg, has signaled she will serve at least one more year, and maybe longer.

The justices handed down three rulings Monday and will decide more of the 14 remaining cases on Thursday. They could wind up their work by the end of the month.

A look at some of the cases that remain:

— Contraceptive coverage: Corporations are claiming the right to exercise religious objections to covering women’s contraceptives under their employee health insurance plans, despite the new health law’s requirement that birth control be among a range of no-cost preventive services included in health plans.

— Abortion clinic buffer zones: Abortion opponents are challenging as a violation of their speech rights a Massachusetts law mandating a 35-foot protest-free zone on public sidewalks outside abortion clinics.

— Cellphone searches: Two cases weigh the power of police to search the cellphones of people they place under arrest without first obtaining a warrant from a judge.

— TV on the Internet: Broadcasters are fighting Internet startup Aereo’s practice of taking television their programming for free and providing it to subscribers who can then watch on smartphones and other portable devices.

— Greenhouse gases: Industry groups assert that environmental regulators overstepped their bounds by trying to apply a provision of the Clean Air Act to control emissions of greenhouse gases from power plants and factories. This case is unlikely to affect the recent proposal from the Environmental Protection Agency to slash carbon dioxide emissions from power plants by nearly one-third by 2030; that plan involves a different part of the same law.

— Union fees: Home health care workers in Illinois want the court to rule that public sector unions cannot collect fees from workers who object to being affiliated with a union.

— Securities fraud: Investors could find it harder to bring class-action lawsuits over securities fraud at publicly traded companies in a case involving Halliburton Co., a provider of energy services.

The selling of the process: The Supreme Court puts America on the block