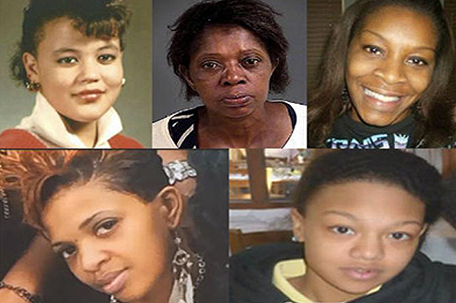 All four deaths are under investigation into how each occurred while in police custody.

In the 17 days since Sandra Bland was found dead from an apparent suicide in her jail cell, four black women have died in police custody in the United States. Kindra Chapman, Joyce Curnell, Ralkina Jones and Raynette Turner  [see article on Turner below] were all found dead in their cells after being arrested by local authorities, The Root.com reports.

The deaths of these black women – all still under investigation – have focused renewed attention on suicide in jails as well as raising questions about treatment of suspects by police.

Chapman was arrested after allegedly stealing a cellphone, and less than two hours after being booked on a first-degree-robbery charge she was found dead in her cell in Homewood County, Ala., according to The Root. Her apparent suicide occurred the day after Bland was found dead in her jail cell in Waller County, Texas.

About a week later, Curnell was identified by Charleston County, S.C., police. The Post and Courier reports that Sheriff’s Maj. Eric Watson said Curnell was arrested on a shoplifting charge. She was found dead in her cell the day after her arrest. Before she was brought to the jail, she was reportedly seen at an area hospital for a medical issue, Watson said. The State Law Enforcement Division, following a request from the Sheriff’s Office, is investigating.

Jones died while in police custody in Cleveland Heights, Ohio, following an altercation with her ex-husband. Jones was charged with felonious assault, domestic violence, and child endangerment, though her ex-husband says he did not want to press charges. Early Sunday morning, Jones was found dead in her jail cell after receiving medical attention earlier in the weekend for appearing lethargic, according to a press release from police.

Turner died while in a holding-cell awaiting arraignment, again on a shoplifting charge, in Mount Vernon, New York, WABC-TV reports local authorities are investigating her death. Police say the mother of eight was treated at a local hospital for hypertension while in custody, and then brought back for her court appearance.

Her husband of 23 years, Herman Turner, said that he waited in court all day Monday for his wife to show up, only to be told to come back the next day. Upon arriving home, two detectives came by to tell him him about his wife’s in-custody death, according to The Root. “She was a mother, she was a wife, she was mine, no longer is she mine,” Turner told local reporters.

According to the US Department of Justice, suicide is the leading cause of death among local jail inmates, based on available data from 2000 to 2010, in which about 3,500 suicide deaths were reported. White prison inmates had the highest mortality rate of all race or ethnic groups in that decade, with a mortality rate between 1.4 and 2.4 times higher than any other race or ethnic group in any single year in the 10-year period. In 2011, the rate of jail suicides was 43 per 100,000 local jail inmates, exponentially higher than the rate of 11.5 per 100,000 people in the country’s general population, International Business Times reports.

The annual suicide rate among jailed inmates has been relatively constant since a decline in the mid-1980s. The International Business Times reports that experts on law enforcement detention say American jails are better at handling mental illness now than they were than a generation ago. A landmark decision in 1980 by the U.S. Court of Appeals’ Fifth Circuit in Texas ordered correctional facilities to ensure the safety for inmates by screening them for suicidal ideation.

In Bland’s case she was screened upon booking for mental health concerns and did not self-report feeling suicidal. Chapman’s case is still under investigation.