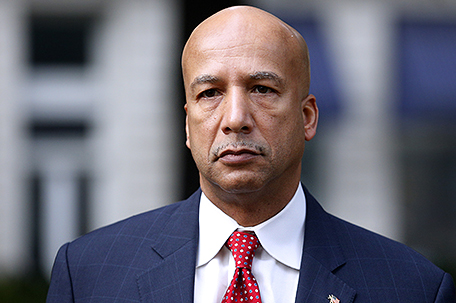 NEW ORLEANS — Former New Orleans Mayor Ray Nagin was sentenced Wednesday to 10 years in prison for bribery, money laundering and other corruption that spanned his two terms as mayor — including the chaotic years after Hurricane Katrina hit in 2005.

Nagin was convicted Feb. 12 of accepting hundreds of thousands of dollars from businessmen who wanted work from the city or Nagin’s support for various projects. The bribes came in the form of money, free vacations and truckloads of free granite for his family business.

The 58-year-old Democrat had defiantly denied any wrongdoing after his 2013 indictment and during his February trial.

Moments before sentencing, a subdued Nagin made a brief statement, thanking the judge for her professionalism. He made no apologies. “I trust that God’s going to work all this out,” he said.

After the sentencing Nagin smiled and hugged supporters as he walked out of the courtroom with his wife, Seletha, and other family members and friends.

Nagin is to report to the federal prison in Oakdale, Louisiana, in September.

Berrigan noted the serious nature of the crimes but cited several other factors in her decision to depart from sentencing guidelines that could have put Nagin in prison for as many as 20 years.

She said Nagin should not be cast as the leader of the scheme in which participants got millions of dollars in city work. “Mr. Nagin claimed a much, much smaller share of the profits in this conspiracy,” Berrigan.

Nagin was alleged to have received roughly a half million dollars.

She noted character references showing him to be a devoted son, husband and father. And she said, despite his crimes, Nagin displayed “a genuine if all too infrequent” desire to help New Orleans and its residents after the 2005 catastrophe.

Nagin was a political newcomer when he won election as New Orleans’ mayor, succeeding Marc Morial in 2002. He cast himself as a reformer and announced crackdowns on corruption in the city’s automobile-inspection and taxi-permit programs. But federal prosecutors say his own corrupt acts began during his first term, continued through the Katrina catastrophe and flourished in his second term.

Until his indictment in 2013, he was perhaps best known for a widely heard radio interview in which he angrily, and sometimes profanely, asked for stepped-up federal response in the days after levee breaches flooded most of the city during Katrina.

He also drew notoriety for impolitic remarks, such as the racially charged “New Orleans will be chocolate again” and his comment that a growing violent crime problem “keeps the New Orleans brand out there.”

Elected in 2002 with strong support from the business community and white voters, Nagin won re-election in 2006 with a campaign that sometimes played on fears among black voters that they were being left out of the city’s spotty recovery. He was limited by law to two consecutive terms but a third term would have been unlikely, giving plunging approval ratings and the stricken city’s continued recovery struggles. He was succeeded in 2010 by Mitch Landrieu.

Most government pre-sentence reports and recommendations were not made public but a filing by Jenkins ahead of the sentencing hearing indicated prosecutors were pushing for a sentence of 20 years or more under federal sentencing guidelines.

Defense attorney Robert Jenkins said that would amount to a virtual life sentence for the former mayor. Jenkins said Nagin’s family needs him, there is no danger of Nagin committing more crimes and that the crimes for which Nagin was convicted constituted an aberration from an otherwise model life.

Prosecutors said the schemes that led to Nagin’s conviction included two family members: His two grown sons were never charged with a crime but they were part of the family business that received free granite from a contractor. They also said that what Jenkins calls an “aberration” was behavior that spanned six years and involved multiple contractors.