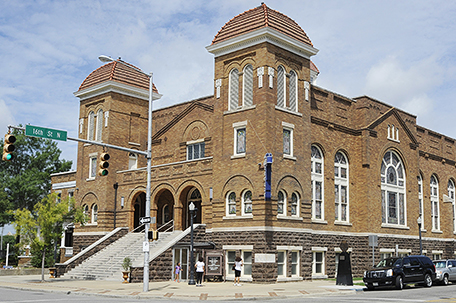 ABOVE PHOTO:  Visitors look at 16th Street Baptist Church in Birmingham, Ala., on Friday, July 29, 2016. The church was the scene of a Ku Klux Klan bombing that killed four black girls in 1963, and Alabama’s parole board is scheduled next week to consider the early release of Thomas Edwin Blanton Jr., the last man serving time for the slayings.       (AP Photo/Jay Reeves)

BIRMINGHAM, Ala. — Thomas Edwin Blanton Jr. was a young Ku Klux Klansman with a reputation for hating blacks in 1963, when a bomb ripped a hole in the side of 16th Street Baptist Church, killing four black girls during the Civil Rights Movement.

Today, Blanton is old and imprisoned, the last survivor among three one-time KKK members convicted of murder in the bombing. Soon, Alabama’s parole board will decide whether Blanton deserves to be free after serving 15 years of a life term for murder.

The board has scheduled a hearing for Wednesday to consider parole for the 78-year-old Blanton. Inmates are not allowed to attend parole hearings in Alabama, but opponents of Blanton’s release are expected to address the three-person board when it meets in Montgomery.

The president of the Alabama NAACP, Bernard Simelton, said releasing Blanton at a time when protests are occurring nationwide over police killings of black people would send a horrible message. NAACP chapters statewide are sending letters in opposition to Blanton’s release, and the Birmingham chapter is sending a busload of people to oppose parole, he said.

“It would be a slap in the face to those young ladies and their families to release him,” Simelton said.

Blanton was convicted of murder and sentenced to life imprisonment in 2001 for being part of a group of Klansmen who planted a dynamite bomb that exploded outside 16th Street Baptist on Sept. 15, 1963. The blast killed 11-year-old Denise McNair and 14-year-olds Addie Mae Collins, Carole Robertson and Cynthia Morris, also known as Cynthia Wesley.

The girls, who were inside the church preparing for worship, died instantly in a hail of bricks and stone that seriously injured Collins’ sister, Sarah Collins Rudolph. Their deaths inside a church on a Sunday morning became a symbol worldwide of the depth of racial hatred in the segregated South. 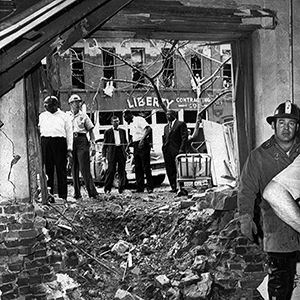 This large crater is the result of a bomb that exploded near a basement room of the Sixteenth Street Baptist Church in Birmingham, Ala. on September 15, 1963, killing four black girls. All the windows were blown out of the building just behind police and emergency workers. (AP Photo)

Doug Jones, a former U.S. attorney who prosecuted Blanton on the state charge, said Blanton shouldn’t be released since he has never accepted responsibility for the bombing or expressed any remorse for a crime that was aimed at maintaining racial separation at a time Birmingham’s public schools were facing a court order to desegregate.

“This was, as I said during the trial, an act of terrorism before the word ‘terrorism’ was part of our everyday lives,” Jones said.

Jones plans to attend the hearing in opposition to Blanton’s early release, and so do several relatives of the girls and the current pastor of 16th Street Baptist, the Rev. Arthur Price. The crowd will include Rudolph, who survived injuries including the loss of an eye and testified against Blanton at his trial.

“I’ll be there. I’m not saying what I will say until then,” said Rudolph.

Blanton and Cherry were indicted in 2000 after the FBI reopened an investigation of the bombing. Evidence against Blanton included secret recordings that were made using FBI bugs at his home and in the car of a fellow Klansman turned informant.

While board members could consider Blanton’s advanced age in deciding whether to grant parole, Jones said that shouldn’t be a factor.

“It took (38) years for him to be brought to justice to begin with,” Jones said. “I think that mitigates against the fact that he is an elderly man now.”

MONTGOMERY, Ala. — Alabama’s parole board decided Wednesday against freeing a one-time Ku Klux Klansman convicted in a church bombing that killed four black girls more than 50 years ago.

The decision to keep Thomas Edwin Blanton Jr., 78, imprisoned was met with applause. Relatives of three of the slain girls spoke against Blanton’s release during the hearing.

Blanton is the last surviving KKK member convicted of murder in the bombing of Birmingham’s 16th Street Baptist Church. He is held in a one-person cell at a maximum security prison and rarely has contact with other inmates, corrections officials say.