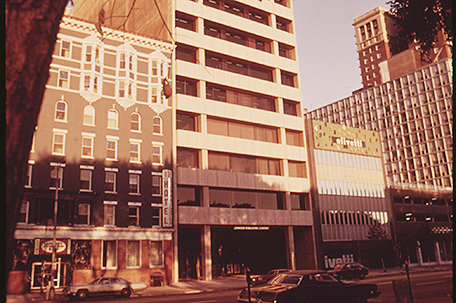 The project is slated to break ground in 2018.

Earlier this year it was revealed that the iconic Johnson Publishing Company headquarters in Chicago would be recognized as a landmark. Now that the structure has been granted landmark status by the city, the building has been sold for $10 million, the Chicago Crusader reported.

The 46-year-old building — which once housed the offices for notable Black publications like Ebony and Jet —was acquired by 3L Real Estate, the news outlet said.

The developer plans to invest $20 million into transforming the building into a luxury residential complex. It will feature 150 apartments and have amenities that include a fitness center, laundry room, and an underground parking garage that Johnson Publishing Company founder John H. Johnson built. Rents start at $1,200 and go up to $2,700. Joseph Slezak, the founder of 3L Real Estate, said he plans to preserve some parts of the structure, including the Ebony and Jet signs on the building’s façade.

The reconstruction project is slated to begin in 2018 and is expected to be completed the following year. Slezak said the building will be “a great fit for the neighborhood.” He also noted that his firm often seeks to acquire “unique” structures.

Ownership of the Johnson Publishing Company building has been passed around throughout the years. Seven years ago, Linda Johnson Rice sold the building to Columbia College, which wanted to transform it into a library. In 2016, however, Columbia College resold the structure.

In February, when there was buzz about the building becoming a landmark, Chicago Mayor Rahm Emanuel referred to it as a “decades-long epicenter of Black history and culture” and “part of the legacy of the city of Chicago.”