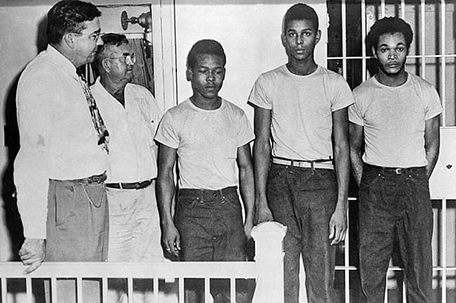 ABOVE PHOTO:  Pictured are three of the Groveland Four.  Ernest Thomas was killed in a hail of bullets by law inforcement after being found sleeping under a tress.      (Photo: Liberty of Congress PPD/NAACP)

TALLAHASSEE, Fla. –The Florida Senate formally apologized on Thursday to the families of four Black men accused of raping a white teenager nearly seven decades ago in a case now seen as a racial injustice.

The Senate also is asking Gov. Rick Scott and the Cabinet to posthumously pardon the men known as the Groveland Four. The Florida House issued the same apology last week. Both votes were unanimous.

“We cannot go back to this terrible event and undo it, but we can acknowledge our wrongs and we can bring peace and healing and closure to the families who have suffered for so long,’’ said Democratic Sen. Gary Farmer, who sponsored the resolution.

Their ordeal began in Lake County in 1949, when a 17-year-old said she had been raped. Three of the men were arrested and severely beaten; a fourth, Ernest Thomas, fled.

A posse of about 1,000 men was formed to hunt down Thomas. He was shot 400 times when they found him sleeping under a tree. White residents also formed a mob and went to a black neighborhood, burning houses and firing guns into homes in a disturbance that took days to quell.

Charles Greenlee, Walter Irvin and Samuel Shepherd were convicted despite dubious evidence. Other evidence that could have exonerated them —  such as a doctor’s conclusion that the teen probably wasn’t raped —  was withheld at their trial. Greenlee was sentenced to life, and Irvin and Shepherd to death. 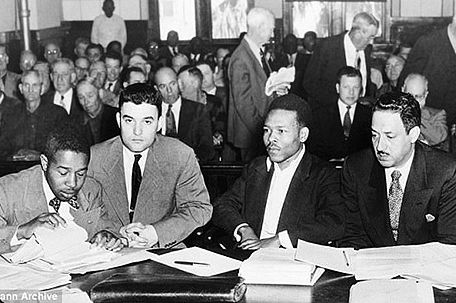 Walter Lee Irvin (second right) is pictured during his trial in 1952. Despite evidence against him being dubious and coerced through beatings, he was sentenced to death again. He was eventually paroled in 1968 and found dead in his car while returning to Lake County for a funeral a year later. Attorney for the ‘Four’, Thurgood Marshall sits at the far right. (Photo: Bettman Archives)

Just before those trials began, Lake County Sheriff Willis McCall shot Irvin and Shepherd, claiming the handcuffed men tried to escape as he transferred him from prison to a jail. Shepherd died. Irvin was shot in the neck and survived despite an ambulance refusing to transport him because he was Black. He was again convicted, even though a former FBI agent testified that prosecutors manufactured evidence against him.

Charges were never brought against any white law enforcement officers or prosecutors who handled the cases.

Irvin was paroled in 1968 and found dead in his car while returning to Lake County for a funeral a year later.

The resolutions don’t call for any financial compensation, but Farmer said they take an important stand.

“I know that the families of Charles Greenlee, Walter Irvin, Samuel Shepherd and Ernest Thomas are looking at us today with great appreciation,’’ Farmer said. “They’ve lived a long time with this indignity and this injustice, this grave miscarriage of justice, and today we take a large step on their behalf.’’ 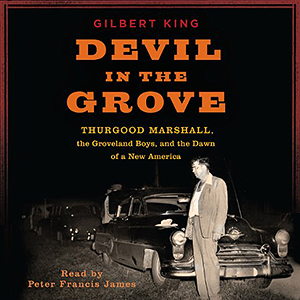 “Devil in the Grove’’ by Gilbert King

Author Gilbert King brought attention to the case with his 2012 book “Devil in the Grove.’’

Greenlee’s daughter Carol was at the Capitol last week when the House issued its apology and said there was a time her father questioned what good could come from talking about his case.

“My father said to me years ago, ‘If it doesn’t help anybody, just forget it. Let the past be in the past,’’’ said Greenlee, 67. “When I look around and I see all of the people who have read the book and have come forth and said ‘This is not right; this is wrong,’ my father’s question was answered. It is helpful and it will continue to be helpful. And that makes me feel good.’’