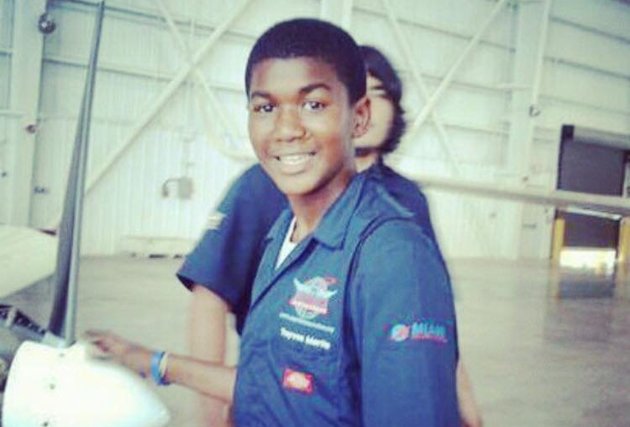 Trayvon Martin, Who Dreamt Of Being A Pilot, To Receive Honorary Aviation Degree

Florida Memorial University will posthumously award Martin at the HBCU’s commencement this month.Trayvon Martin was killed in 2012 by a neighborhood watchman.

An aviation school in Florida is honoring Trayvon Martin with a posthumous degree at its commencement this month.

Florida Memorial University, a historically black college, announced in a Facebook post Wednesday that the 17-year-old, who was gunned down by a neighborhood watchman in 2012, will receive a bachelor’s degree in aeronautical science with a concentration in flight education on May 13.

The degree will honor the “steps he took during his young life toward becoming a pilot.” His parents, Sybrina Fulton and Tracy Martin, will accept the degree on his behalf.

The university’s president, Roslyn Clark, said that awarding the posthumous degree is important for the school and noted that Fulton is an alumna of the HBCU.

“Of special significance is awarding posthumously the Bachelor of Science Degree in Aviation to Trayvon Martin. Sybrina, our alum, epitomizes strength and dignity as she uplifts other victims of violence while effecting change for a more equal and just society,” Clark said in the press release.

In addition to the degree, the HBCU will host a post-commencement fundraiser. A portion of the proceeds will go to The Trayvon Martin Foundation, which is headquartered at the college.

Before he was killed, Martin had dreams of becoming a pilot. Fulton told the Tampa Bay Times in 2012 that her son spent time studying at George T. Baker Aviation School during his freshman year of high school. Martin was inspired by his uncle, Ronald Fulton, who had a brief career in aviation. Barrington Irving ― who in 2007 became the youngest person at the time to pilot a plane around the world solo ― also had a big influence on Martin’s interest after he started attending Irving’s summer youth programs.

“He loved flying and working with his hands. Barrington Irving took him on his plane at the Opa-Locka Airport. He got a chance to sit in the cockpit and that did it for him,” Fulton told the Times. “He wanted to be a pilot or work as a mechanic in aviation. He was mechanically inclined and could fix just about anything.”

Neighborhood watchman George Zimmerman killed Martin five years ago in Florida. Zimmerman called 911 to report that Martin, who was carrying an Arizona Iced Tea and Skittles, looked suspicious. Despite dispatchers instructing Zimmerman not to pursue the teen, he did anyway. He got into a fight with Martin and fatally shot him.

Martin’s death sparked protest nationwide and led to the creation of Black Lives Matter. Zimmerman was acquitted of second-degree murder and manslaughter charges in 2013.