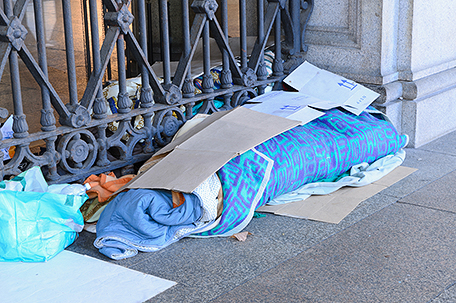 A backpack. Spare clothes. A notebook. Some keepsake photos. Crackers.

Though they may not have a home in which to secure their stuff, homeless people still have possessions like everyone else.

Yet the city of Ft. Lauderdale, Florida is on the cusp of passing a new regulation that would make it illegal for anyone to store their personal things on public property. Specifically, it would empower police to confiscate any personal possessions stored on public property, provided they have given the homeless person 24-hours notice. If the homeless people wish to retrieve their items, they must pay the city “reasonable charges for storage and removal of the items,” though that fee is waived if the person is able to demonstrate he or she cannot afford to pay. The city may dispose of any possessions not retrieved within 30 days. One of the driving factors behind the measure, according to the legislation, is the city’s “interest in aesthetics.”

Last week, the City Commission gave unanimous preliminary approval to the measure, despite overwhelming opposition from local residents who testified.

One woman, Gazol Tajalli, told Commissioners that is “insanity that we are even here discussing whether an individual can put on the ground the few objects that they own.” Another citizen, Rev. Gail Tapscott of the Unitarian Universalist Church of Ft. Lauderdale, criticized some of the Commissioners for “demoniz[ing]” the homeless.

Maria Foscarinis, Executive Director of the National Law Center on Homelessness & Poverty, chastised Ft. Lauderdale’s approach. “Maintaining city streets is a legitimate concern, but simply punishing homeless people for leaving their possessions in public places is not an effective or humane way to address it,” she told ThinkProgress. “Instead, city and business leaders should work with advocates and homeless people to develop alternative short and long term solutions, such as public storage options for homeless people and affordable housing.”

According to the Sun Sentinel, “The commission’s actions were backed by business leaders who said they were looking for some controls on a situation that scares away customers and makes visitors uncomfortable.” The commission is also considering other initiatives targeting the homeless, including stiffer penalties for urinating or defecating in public, prohibitions on panhandling at intersections or sleeping in public, and restrictions on charity groups that hand out food to the homeless.

Ft. Lauderdale is not the only city to embrace new ordinances that criminalize people for being homeless. Scores of cities, including Columbia, Palo Alto, Miami, Raleigh, Tampa, Harrisburg, and others have enacted measures that render homeless people simply trying to survive as criminals. Other cities, like Davis, California, are taking a different approach: constructing public lockers where homeless people can safely store their possessions.