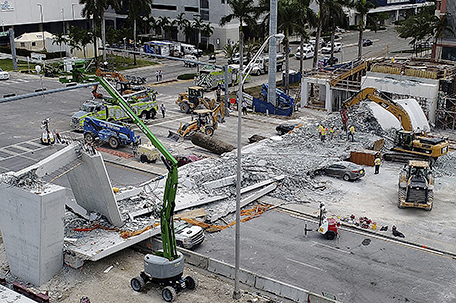 ABOVE PHOTO:  Recovery operations continue Saturday morning, March 17, 2018, at the site of the Florida International University-Sweetwater University bridge in the Miami area that collapsed during construction earlier in the week. (Pedro Portal/Miami Herald via AP)

Lawsuits have been filed

MIAMI — Students returning from spring break to Florida International University held a moment of silence Monday to honor the six people killed in the collapse of a pedestrian bridge that was supposed to be a campus showcase.

Some were angry that traffic had continued under the bridge while testing continued on the 950-ton structure.

“They were stress testing with cars passing under, people walking across. Why?” said marine biology sophomore Andy Distrubell.

He was on spring break when the bridge fell, but he said the experiences of the victims trapped beneath the bridge had been weighing on his mind.

“The thought of just sitting in traffic, waiting on a red light and all of a sudden a bridge falls on you is scary,” he said.

Florida International University President Mark Rosenberg joined students and staff to hold hands and bow their heads Monday for a moment of silence outdoors at 1:47 p.m. – the time that the bridge collapsed four days earlier. In a dining hall, some students stood up or put down their food and stopped talking to participate.

Meanwhile, two lawsuits were filed in Miami-Dade Circuit Court against the companies involved in the design and building of the bridge.

The first lawsuit was filed on behalf of Marquise Rashaad Hepburn, who suffered spinal injuries as he rode a bicycle under the bridge as it collapsed last week. The lawsuit said a car swerving to avoid the falling concrete struck Hepburn.

At a news conference in Orlando, one of Hepburn’s attorneys, Keith Mitnik, said Hepburn was on his way to work when the bridge fell.

The negligence lawsuit seeks unspecified damages from the entities involved in building the bridge, including Munilla Construction Management and FIGG Bridge Engineers. Both companies say they would cooperate with multiple investigations into the collapse.

A second lawsuit has also been filed in the deadly pedestrian bridge collapse in Miami.

Florida International University student Emily Panagos was driving by her school when the newly constructed concrete bridge fell, crushing the back of her car. Six people were killed and nine were injured, including the 22-year-old Panagos.

Attorney Matt Morgan said Tuesday that his client suffered serious injury “as a direct result of her car being crushed, coming quite literally, within inches of her life.”

Another survivor filed a lawsuit Monday against the companies involved in designing the bridge. The families of two men who were killed said Tuesday that they will file wrongful-death lawsuits later this week.

Gov. Rick Scott on Monday directed Florida’s Department of Transportation to withhold payments of over $13.6 million in federal funding for the collapsed bridge, pending the completion of a National Transportation Safety Board investigation.

“Before another dollar is spent on this bridge, we must know exactly what happened,” Scott said in a statement.

The moment of silence at FIU was the first in a series of memorials as classes resumed. In a statement, Rosenberg said a blood drive was scheduled Tuesday to support wounded victims who remain hospitalized.

The Student Government Association will hold a vigil Wednesday morning for Alexa Duran, an FIU student killed when the bridge collapsed on her car. Duran’s sorority will hold a memorial for her Thursday evening.

Carolina Fajardo, a pre-medical student, said she had been glued to the news to know more about the bridge collapse.

“They had been talking so much about that project in school. I drive through there every day of the week,” she said. “To think it could have happened later, this week when we are all back, it’s just crazy.”