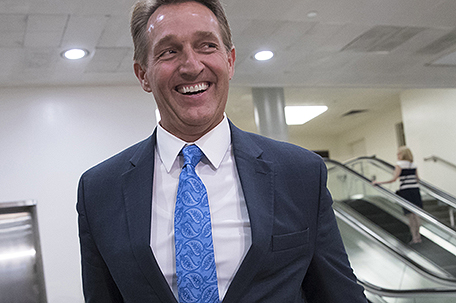 The Arizona senator made the rounds of morning television news shows to talk about his decision not to run for re-election in 2018 and his impassioned speech on the Senate floor Tuesday, in which he said he could no longer be “complicit” with the Republican president.

“We are excusing undignified and outrageous and reckless speech and behavior as ’telling it like it is.’…. That’s not right,” Flake said Wednesday on MSNBC.

Trump immediately fired back on Twitter, saying that Flake and another retiring Senate Republican, Bob Corker of Tennessee — who had criticized Trump on Tuesday as “untruthful” and debasing the nation — aren’t running for re-election because “they had zero chance of being elected.”

He also contended that Flake and Corker stand alone, boasting in several tweets that he had gotten standing ovations at a Senate Republicans’ luncheon Tuesday at the Capitol. 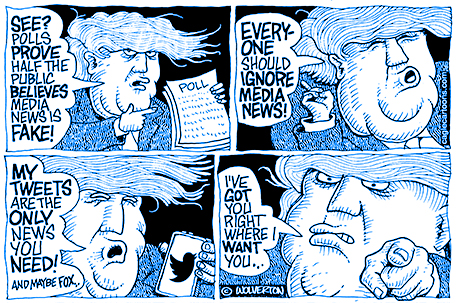 Other Republicans bemoaned the GOP infighting and feared its impact on the stalled Republican agenda.

One Republican senator announces his retirement with a broadside against President Donald Trump and a second attacks the president in a series of interviews – an extraordinary day of public GOP division. (Oct. 24)

“I wish we didn’t have a personal discord. It distracts us from the main course,” said Sen. Richard Shelby of Alabama, who mentioned a proposed tax overhaul. “But it is what it is.”

Shelby said Trump had a right to defend himself in response to the criticism.

“I attack you, you’re going to fight back, I hope,” Shelby said. Pressed on whether it is presidential to rise above personal attacks, Shelby said, “You might ask is it being senatorial, too?”

Sen. John Boozman, (R-Ark.), declined to comment on Flake’s criticism, and when asked if Trump is fit for office, said, “Of course he is.”

Flake cited the era of McCarthy, the Republican Wisconsin senator whose smear tactics alleging Communist infiltration ultimately led to his censure. In an op-ed column in The Washington Post, Flake quoted Joseph Welch, an Army lawyer, who stood up to McCarthy in a June 1954 hearing and demanded: “Have you no sense of decency, Sir?”

“The moral power of Welch’s words ended McCarthy’s rampage on American values, and effectively his career as well,” Flake wrote. “We face just such a time now. We have again forgotten who we are supposed to be.”

Flake also said he thinks more of his Republican colleagues will speak out.

“It’s up to us to stand us and say, ’This is not acceptable,’” he told ABC’s “Good Morning America.”

Asked why others in his party haven’t yet done so, Flake said, “There is some fatigue about it.”

Flake stopped short of saying Trump should be declared unfit for office or impeached.

“The voters made their choice,” Flake said. “He was elected fair and square.”

Trump accuses Obama of tapping his phones, cites no evidence