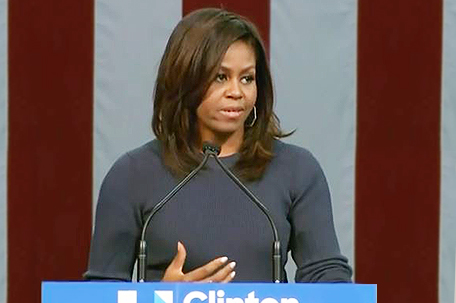 Open letter from 1,200 Christian women say the ‘sin of misogyny has caused many of us to experience sexual assault’

Black women across the U. S. are continuing to express outrage this week in response to a released tape of lewd comments about women, made by Republican presidential candidate Donald Trump.

In an epic speech on Oct. 13, First Lady Michelle Obama told a crowd in New Hampshire that Trump’s language can never be excused as “locker room” talk as he described it, and she asked women – Republicans and Democrats – not to remain silent.

“The fact is that in this election, we have a candidate for President of the United States who, over the course of his lifetime and the course of this campaign, has said things about women that are so shocking, so demeaning that I simply will not repeat anything here today. And last week, we saw this candidate actually bragging about sexually assaulting women. And I can’t believe that I’m saying that a candidate for President of the United States has bragged about sexually assaulting women,” Obama said.  “And I have to tell you, that I can’t stop thinking about this. It has shaken me to my core in a way that I couldn’t have predicted. So, while I’d love nothing more than to pretend like this isn’t happening, and to come out here and do my normal campaign speech, it would be dishonest and disingenuous to me to just move on to the next thing like this was all just a bad dream.”

Mrs. Obama’s sentiments were among a groundswell of outrage, including a string of Republicans who withdrew their endorsement of Trump after hearing the audio. That outrage continued to grow this week as a racially diverse group of more than 1,200 leading Christian women signed an open letter also expressing their disdain, and to urge other religious leaders to not only take a stand  but also “help their communities heal from the sins of sexual violence and misogyny,” stated the press.

“As Christian women, we are appalled by Republican presidential nominee Donald Trump’s recorded remarks that disparage women and condone sexual assault. Such language cannot be dismissed as ‘locker room talk.’ Mr. Trump must offer public contrition that fully acknowledges the seriousness and depravity of his actions. The sin of misogyny has caused many of us to experience sexual assault or sexually abusive language that threatened our safety, dignity and well-being,” states the letter, dated Oct. 14. “Christian leaders cannot condone such violent speech about women as a minor mistake or an innocent attempt to be ‘macho.’ These excuses teach our young people that such language is acceptable, and do further harm to those who have been abused. We urge all religious leaders to preach, teach and help their communities heal from the twin sins of sexual violence and misogyny. While we are disheartened by Mr. Trump’s toxic words, we believe this moment presents an opportunity to teach our daughters and sons that they are loved, and to teach all Americans how to speak out against sexually violent language.” 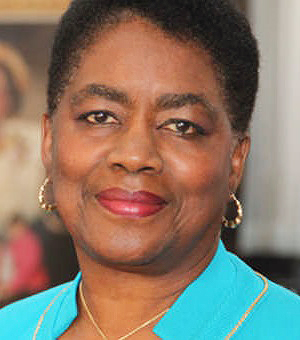 “The violent language spewed by Donald Trump about women is not only insulting, it’s laden with criminal intent. To dismiss these lewd remarks as simply ‘locker room’ talk would be to suggest that this type of rhetoric or behavior is acceptable,” said Dr. Skinner, in the news release. “As faith leaders, we must teach all Americans how to speak out against sexually violent language and to affirm the dignity of all people.”

The letter comes on the heels of Mrs. Obama’s White House celebration of the International Day of the Girl and the official launch of her new educational initiative, “Let Girls Learn”.

“So I thought it would be important to remind these young women how valuable and precious they are. I wanted them to understand that the measure of any society is how it treats its women and girls. And I told them that they deserve to be treated with dignity and respect, and I told them that they should disregard anyone who demeans or devalues them, and that they should make their voices heard in the world,” the First Lady said in her speech.

This week, Trump’s wife, Melania, said in an interview with CNN’s Anderson Cooper that she had forgiven her husband for what she described as “boy talk.”

However, First Lady Michelle Obama rejects any minimization of Trump’s words: “This is not something that we can ignore. It’s not something we can just sweep under the rug as just another disturbing footnote in a sad election season. Because this was not just a ‘lewd conversation.’ This wasn’t just locker-room banter. This was a powerful individual speaking freely and openly about sexually predatory behavior, and actually bragging about kissing and groping women, using language so obscene that many of us were worried about our children hearing it when we turn on the TV…It is cruel. It’s frightening. And the truth is, it hurts. It hurts.”