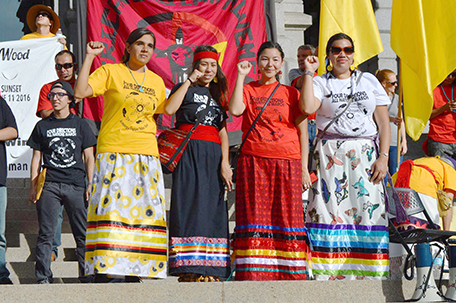 ABOVE PHOTO:  Organizers of the Four Directions March in Denver stand, fists up, on the west steps of the Colorado State Capitol on Saturday. Tessa McLean, second from right, said Christopher Columbus represents racism.  (Photo: Facebook)

For some, Columbus Day just means a day off.

Or maybe it’s a reminder that state offices are closed.

But for Tessa McLean, Ojibwe, it’s a day that bears great pain and disappointment.

On Saturday, McLean and members of the American Indian Movement of Colorado held the Four Directions All Nations March and Rally in Denver to protest the holiday that members say promotes Christopher Columbus’ “colonial legacy.”

“He represents domination, forced assimilation, genocide. He brought rape and murder to our women, and it’s just inappropriate to celebrate that as something positive,” McLean said.

Colorado happens to be ground zero for the controversial holiday.

In 1907, Columbus Day was founded in the state. Then, in 1937, it became a federal holiday to be celebrated every second Monday in October.

The holiday was established to honor the allegedly Italian explorer (there’s controversy surrounding his parentage) who is credited for “discovering North America,” as many school textbooks still read today.

But, year after year, more and more cities across the nation continue to replace the day with a holiday that recognizes the nation’s first peoples instead.

Just last week, cities like Denver and Phoenix, Arizona, as well as the state of Vermont joined the list of places in the U.S. that are dropping the controversial October holiday to make way for Indigenous Peoples’ Day.

The vote by Denver city councilmembers to establish Indigenous Peoples’ Day was unanimous.

According to CNN, more than a dozen places have adopted the Indigenous People’s Day holiday in just the last 12 months, including Cambridge, Massachusetts, Santa Fe, New Mexico, and Lincoln, Nebraska.

“This is a movement. It’s an absolute, huge wave that’s occurring all across the nation … that’s why I wanted Colorado to be part of the leadership on this,” Salazar said.

Earlier this year, Salazar, a Chicano, sponsored a bill that would have changed Columbus Day to Indigenous Peoples’ Day. Salazar said he chose to carry the bill, House Bill 1135, because members of the community asked for his support.

The bill ultimately died in committee.

“We have to rectify the inequities of the past, and (abolishing Columbus Day) is a good start,” he said. “We have to start honoring the American Indian community, and we have a dark mark in this county that needs to be rectified.”

Salazar said he has received backlash and even death threats for sponsoring the bill, but he said that isn’t going to stop him from changing his agenda.

“I’m very proud of (Denver city) councilman Paul Lopez for help leading that effort on behalf of the community to get (Indigenous Peoples Day) passed here in the city and county of Denver,” Salazar said. “Now, I just have to do my job as a state representative and get it over the finish line.”

Native American women are more than twice as likely to be sexually assaulted than women of any other demographic in the U.S., according to reports.

In an effort to build a deeper relationship with three Ute tribes in the southwest region of Colorado, on Saturday members of the Telluride community held an Indigenous Peoples’ Day to address the historic injustices that occurred on the reservations in Colorado and Utah.

Event co-organizer, San Miguel County Commissioner Art Goodtimes, said in a press release that the day served as a “day of healing and education.”

But while the quest to change Columbus Day to Indigenous Peoples’ Day continues to gain traction, there are still people out there who are against the change.

Rita DeFrange, president of the Columbus Day Parade Committee and a member of the Denver chapter of the Order Sons of Italy, said it’s “not fair” that city officials are taking away from one group to give to another.

“It’s a struggle for folks. The community itself is very disappointed. They don’t understand why they are being picked on,” DeFrange told ICTMN.

DeFrange said herself and her community just want to celebrate their history and heritage.

“Unfortunately, we’re evaluating a man by 2016 standards, when the events happened 500 years ago,” DeFrange said. “The community really needs to take a hard look at how we look at our history books.”

Members of the Columbus Day Parade Committee and Order Sons of Italy met with Salazar earlier this year to discuss resolutions that could make both parties happy.

No resolutions were met, DeFrange said.

She said she’s more than happy to celebrate the heritage of the Native American people, but just on a different day.

“It’s one day. It’s a group of individuals who value their Italian heritage,” DeFrange said. “We all value the cultures … that’s what’s so great about America. You know, let’s not take one over the other and that’s the perception that people have.”

“I think that these people who are saying that their culture is being ripped away from them – let’s look at the other side of history and say, ‘Well, indigenous people … so much worse has happened to them.’” McLean responded.

DeFrange couldn’t confirm that there have been rumors that some Italian-American community members in Denver want to file suit on against the city and county of Denver for recognizing Indigenous Peoples’ Day on the same day as Columbus Day.

While McLean and Salazar both recognize that Indigenous Peoples’ Day is a great start to changing the holiday, they say there’s still a lot of work that needs to be done.

Salazar hopes to reintroduce the bill next year and ultimately wants to abolish it as a federal holiday as a whole.

“I’ve heard from so many members of the American Indian community who say, ‘you know what, we’re OK if it’s not replaced with Indigenous Peoples’ Day – we just want Columbus Day gone,’” Salazar said.

DeFrange said she hopes to preserve Columbus Day, and she said she will continue pushing for discussion of the topic.

“I would encourage the community to pull together and have that conversation before we really do major damage across the board,” DeFrange said.

Embrace the holiday spirit and fight hunger in your hometown