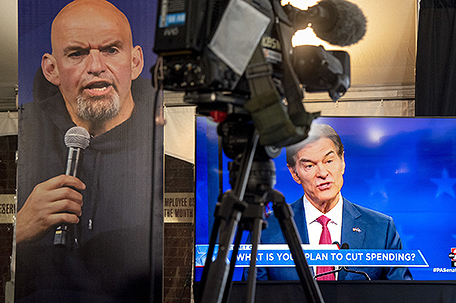 ABOVE PHOTO: Republican Mehmet Oz, right, is seen live on a monitor in the media tent, next to a poster of Democrat John Fetterman, left, as the two U.S. Senate candidates hold their first and only debate, at the WHTM-TV/ABC 27 Studio in Harrisburg, Pa., Tuesday, Oct. 25, 2022. (Tom Gralish/The Philadelphia Inquirer via AP)

By Steve Peoples And Marc Levy

HARRISBURG, Pa. — Pennsylvania Democrat John Fetterman’s rocky debate performance fueled concern inside his party on Wednesday, as leaders assessed whether it would significantly shift a race that could decide control of the U.S. Senate and the future of Joe Biden’s presidency.

Appearing on stage five months after his stroke, Fetterman, Pennsylvania’s 53-year-old lieutenant governor, struggled to complete sentences, and he jumbled words throughout the hourlong televised event.

That was no surprise for medical professionals, who noted that the format, including time limits on answers, was the opposite of what a person recovering from a stroke would need to support his communication. And for those who have known Fetterman for years, the debate was a reminder that he was never a smooth orator — even before the stroke.

But with so much hinging on his campaign, some Democrats expressed concern that Fetterman’s appearance at Tuesday night’s debate was a mistake. While he would have been criticized for skipping the forum, they felt that might have been better than exposing him in such a difficult environment — for a performance that his Republican opponent, Dr. Mehmet Oz, can exploit in ads and social media clips in the closing days of the contest.

“In retrospect, he probably shouldn’t have debated,” former Pennsylvania Gov. Ed Rendell, a Democrat, said in an interview. “But the key is he is recovering from a stroke.”

“The only way to recover from this,” he added, “is for John to go out in public as much as possible, to be seen, to be interviewed, and do as much as he can to let people know that he’s ready to take office.”

In fact, Fetterman appeared at a rally Wednesday night at an outdoor stage in Pittsburgh and, before a crowd of what the campaign said was 3,000 people, spoke smoothly for 13 minutes before introducing musician Dave Matthews.

“In fact, I don’t think that’s ever been done before in American political history,” he said.

After the debate, Fetterman said, “something remarkable happened”: The campaign raised more than $2 million. He then launched into a stump speech that both attacked Oz and aimed to turn his recovery into a way to connect with voters.

Fetterman is also expected to speak at a dinner Friday night in Philadelphia for the state Democratic Party headlined by Biden and Vice President Kamala Harris.

During the debate, the Democratic Senate contender refused anew to commit to releasing his medical records, but independent experts consulted by The Associated Press said Fetterman appears to be recovering remarkably well.

“In my opinion, he did very well,” said Dr. Sonia Sheth, of Northwestern Medicine Marianjoy Rehabilitation Hospital in suburban Chicago, who watched the debate. “He had his stroke less than one year ago and will continue to recover over the next year. He had some errors in his responses, but overall he was able to formulate fluent, thoughtful answers.”

Still, the debate was difficult to watch for Brooke Hatfield, a Maryland speech pathologist who has worked extensively with stroke patients.

“Putting a timer on someone adds pressure to a system that is already working hard,” Hatfield said. “Ultimately it’s important to remember that changes in communication are different than changes in intelligence, reasoning and other cognitive skills.”

For now, the political implications of the debate are unclear.

The Pennsylvania contest represents the Democratic Party’s best opportunity to flip a Senate seat currently held by Republicans, who are aggressively challenging Democratic incumbents across Arizona, Georgia, Nevada and New Hampshire. Any shift in Pennsylvania, where at least 639,000 mail votes have already been returned, could imperil Democratic efforts to keep the Senate, which they hold by the narrowest of margins.

Sen. Chris Coons (D-Del.) told CNN on Wednesday that the debate was “hard to watch, frankly.”

But he said voters have a “stark choice” between Fetterman and Oz, a heart surgeon and TV personality.

Other U.S. senators have experienced strokes, but none faced fiercely competitive contests so quickly. Both Sens. Chris Van Hollen (D-Md.) and Ben Ray Lujan (D-N.M.) disclosed this year that they had suffered minor strokes. Van Hollen is likely to easily win reelection in his deeply Democratic state this year, and Lujan isn’t on the ballot again until 2026.

Former Sen. Mark Kirk (R-Ill.) had a serious stroke in 2012 and would go on to lose his reelection four years later.

Over the years, many other senators have faced questions about their age. Republican Sen. Chuck Grassley, of Iowa would be 95 at the end of his next term, assuming he wins reelection on Nov. 8.

Fetterman’s campaign and other Democrats sought to focus Wednesday on Oz’s comments about abortion during the debate. The Republican said he wanted abortion access decided by “women, doctors, local political leaders,” a comment that suggested he believed there was a role for public officials in determining whether women can obtain the procedure, which remains legal in Pennsylvania.

“Oz would let politicians like Doug Mastriano ban abortions without exceptions,” the narrator says, referring to the state’s polarizing Republican candidate for governor. “Oz is too extreme for Pennsylvania.”

The White House would not say whether Biden watched the debate. But press secretary Karine Jean-Pierre said Biden has found Fetterman to be “just as capable as always” to govern.

“In his conversations that he’s had with Lt. Gov. Fetterman, he finds the lieutenant governor to be a strong and authentic advocate for the middle class,” Jean-Pierre said, adding that the president “finds him incredibly impressive.”

Meanwhile, Oz on Wednesday was attending an event in the state capital with former U.N. Ambassador Nikki Haley, a potential 2024 Republican presidential candidate. Oz avoided Fetterman’s health at the event, as he did during the debate, focusing instead on crime.

“I vow here and now that, as a U.S. senator, I’ll do the right thing for our communities,” he declared. “Amongst them, I’m going to let police do their jobs. I want our prosecutors to do their jobs.”

But the debate was on the minds of many voters.

Barbara Orr, a psychotherapist and registered Democrat who supports Fetterman, said she and a group of like-minded friends who watched the debate were saddened and nervous, but unswayed from their decision to vote for him.

Her “heart hurt for him,” she said, and she worried that voters who weren’t familiar with the candidates might take away a bad impression.

“Unfortunately, people who don’t know what he stands for and haven’t heard him elsewhere might think he’s not smart,” said Orr, who lives in Lampeter.

She added: “I’m hoping some people at least pulled their empathy pants on and realized that he’s trying to recover from something.”

Democratic voter Frank Mallon, a 61-year-old driving instructor who lives in suburban Philadelphia, said Fetterman “came across as not being sure of himself.”

“Yes, I do know about the disability,” Mallon said. “Do I think that everyone who watched that debate knows about his disability? No, I don’t.”

Fetterman’s allies noted that he also had performed poorly in a primary debate earlier in the year before the stroke.

“It needs to settle with people for a minute. People on the Democratic side were terrified about what was going to happen,” said Jamie Perrapato, executive director of Turn PA Blue. “His performance was actually better than I expected.”

Bonnie Chang, a telecommunications retiree from Doylestown who describes herself as a liberal Fetterman supporter, didn’t tune in.

“I was so fearful I did not watch the debate,” Chang said. “First of all, Oz is a TV guy. He has honed his skills. … I think Fetterman is in a no-win situation. He’s recovering from the stroke.”

“I’m willing to give him time to recover.”