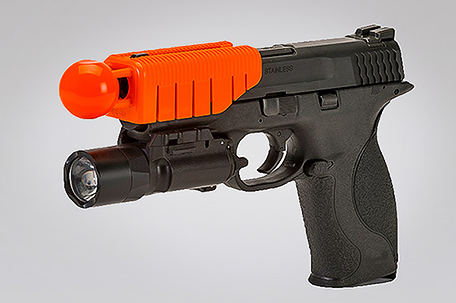 ABOVE PHOTO:  The ‘Alternative’ firearm from Alternative Ballistics.

Assistant police chief believes device will help them avoid another shooting like that of Michael Brown.

The police department in Ferguson, Missouri, is exploring a non-lethal method of subduing would-be rioters from getting out of hand. This is in the wake of an officer shooting an unarmed adult in the St. Louis suburb last summer.

Former Ferguson Police Officer Darren Wilson was cleared by a grand jury in November of all charges related to the fatal shooting of 18-year old Michael Brown. The U.S. Department of Justice announced last month that civil rights charges likely would not be filed against Wilson.

Now, in an effort to prevent a similar incident in the future, Al Eickhoff, the Ferguson police department’s assistant police chief, searched online for a “less lethal” solution. What the 36- year- veteran found was ‘The Alternative,’ developed by Alternative Ballistics, a California-based company just a half hour north of San Diego. From the company’s website:

‘The Alternative’ was developed as a blunt force impact device to fill the void in lethal force situations, which until now could only be addressed with a firearm.

Concerned with the number of deaths of officers and citizens resulting when confrontations occur, where a new lethal force option would have been preferred but not readily available, we developed ‘The Alternative.’

To use the device, an officer takes it from his or her belt and attaches it atop a firearm. Once the trigger is pulled, the bullet would travel inside the hard plastic device the size of a ping-pong ball. Upon hitting a person, it will harm him and likely break some ribs, but not cause death.

Eickhoff spoke positively about ‘The Alternative.’ “It gives another option,” he told reporter Richard Leiby. “I really liked it…You are always looking to save a live, not take a life.”

Not everyone is crazy about it, however. Steve Ijames, a former major and training officer in Springfield, Missouri, expressed concern that for officers to use the device, they need to take an extra step to remove it from their belt and attach it to the gun.

Ijames asserted that delay “exposes police officers to greater risk” and “turns policy on its head.”

“I am all about less lethal,” he continued. “What bothers me is we will allow an officer to face immediate deadly jeopardy with a less-lethal round. Deadly force is the most likely thing to repel deadly force.”