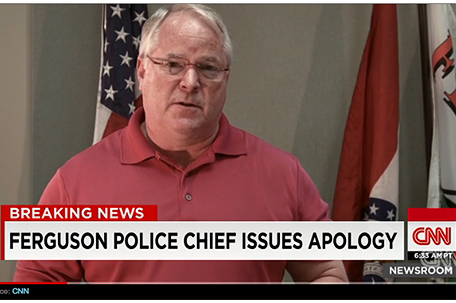 ABOVE PHOTO:  Ferguson Police Chief Thomas Jackson speaks at a press conference to apologize to the parents of Michael Brown in his shooting by PO Darren Wilson, six weeks ago.  (screen grab: CNN)

CNN reported on Thursday, Ferguson, Missouri, Police Chief Thomas Jackson apologized to the parents of Michael Brown, as well as to any peaceful protesters who feel he didn’t do “enough to protect their constitutional right to protest.”

Specifically, he apologized that it took investigating officers four hours to remove Brown’s body from the street after Officer Darren Wilson fatally shot him last month.

“I’m truly sorry for the loss of your son. I’m also sorry that it took so long to remove Michael from the street,” he said during his video statement.

Investigators were doing “important work” trying to uncover the truth and collect evidence during those four hours, Jackson said, but “it was just too long, and I’m truly sorry for that.”

“Please know that the investigating officers meant no disrespect to the Brown family, to the African-American community or the people (in the neighborhood where Brown was shot). They were simply trying to do their jobs,” Jackson said.

Dressed casually in a red polo shirt, Jackson acknowledged that most of the protesters who took to the streets of Ferguson following the shooting did so peacefully, but there were others among them “who had a different agenda.”

Jackson singled out the peaceful protesters in his apology.

“The right of the people to peacefully assemble is what the police are here to protect. If anyone who was peacefully exercising that right is upset and angry, I feel responsible and I’m sorry,” he said.