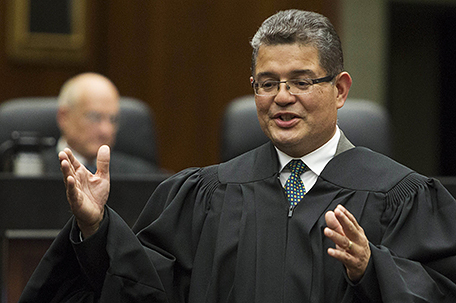 ABOVE PHOTO:  Ruben Castillo, the new chief judge of the U.S. District Court in Chicago, gives concluding remarks after being sworn in as chief judge. Castillo has questioned whether the federal government in a drug case racially profiled African-Americans and Latinos. In a decision posted late Wednesday, July 31, 2013, Castillo wrote that since 2011, 19 African-Americans and seven Latinos have been charged in drug stings in the Chicago area, in which agents used an informant to talk suspects into robbing a fake stash house. (AP Photo/Scott Eisen, File)

CHICAGO — A federal judge in Chicago is slated to issue a first-in-the-nation ruling Monday about whether law enforcement stings in which suspects are talked into stealing non-existent drugs from non-existent stash houses are racially biased.

The ruling could determine whether agencies nationwide curtail their reliance on phony stash-house stings, which date to the 1990s and are overseen by the U.S. Bureau of Alcohol, Tobacco, Firearms and Explosives. The stings typically involve agents posing as couriers for drug cartels.

Defense attorneys contend the stings discriminate because they overwhelmingly target Blacks and Latinos. They also criticize how law enforcement can arbitrarily increase the severity of charges simply by raising the amount of drugs they say are in the stash houses. Also, suspects often are charged with trying to distribute the drugs, even though the drugs never existed.

The judge issuing the ruling is the Chicago federal court’s first Hispanic chief judge, Ruben Castillo. His ruling in 2013 that there was a “strong showing of potential bias” in the stings generated years of legal motions and dueling expert reports, culminating in Monday’s ruling.

Castillo and eight other federal judges held rare joint hearings in December to examine statistics-based evidence on the issue. Combined, the judges are overseeing a dozen different criminal cases involving more than 40 suspects arrested in stash-house stings, but they all heard the same evidence on the question about bias. Castillo would be the first to rule, though the other judges could issue their own decisions later.

The answer to whether or not the stings discriminate based on race largely hinges on competing interpretations of statistics.

Jeffrey Fagan, a defense expert, testified in December that out of 94 stash-house defendants in the Chicago area between 2006 and 2013, 74 were Black, 12 were Hispanic and just eight were white. If the ATF criteria for picking targets were truly colorblind, he said, far more whites would have been snared.

But government witness Max Schanzenbach said Fagan’s methodology was flawed. He said it’s only natural that trafficking-related stings are focused where trafficking activity is highest — in low-income areas of Chicago that have a higher concentration of blacks and Hispanics.

Since the hearings, defense lawyers have said they were seeking plea deals to avoid trials. But Castillo indicated he would issue a ruling Monday even if all the defendants strike plea agreements.

Courts have ruled previously that proving racial bias doesn’t necessarily require proof of explicit racist behavior, such as an official caught using racial slurs. It can sometimes be enough to point to statistical evidence that a racial group is disproportionately hurt by a policy.