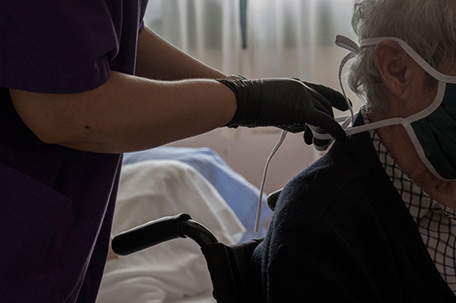 PITTSBURGH (AP) — Federal agents searched two nursing homes Thursday near Pittsburgh, one of which had the worst coronavirus outbreak of any in Pennsylvania and was already being investigated by the state on suspicion of criminal neglect.

The agents were from the FBI, the Office of Inspector General for Health and Human Services, IRS-Criminal Investigation and state attorney general’s office, Brady said.

More than 330 of the for-profit Brighton nursing home’s residents tested positive for the virus since the end of March, and at least 82 of them died, the newspaper reported.

No other information was available about the searches. A spokesperson for the Pennsylvania attorney general’s office confirmed the office was involved in the warrant execution but said she could not discuss the searches further.

The office previously confirmed that Brighton was one of a handful of nursing home facilities being investigated for criminal neglect related to their pandemic response.

Temple University announced last Thursday that the majority of classes will shift online through the end of the fall semester amid rising numbers of coronavirus cases among students. In an emailed statement attributed to the university’s president and provost, the university said they had tried in-person classes because students had overwhelmingly expressed a preference to come back to campus. But after talking to officials at the city Health Department, the university’s leadership decided to shift about 95% of classes online.

Students living on campus can opt to leave by Sept. 13, and the university will refund charges for housing and meal plans. But officials said students will be allowed to stay and services such as health services will remain in place.

“We know this is disappointing for the many students and their families who had hoped for an on-campus experience. Please know that if the data supported a decision to safely continue the fall semester experience on campus, we would have made every effort to do so,” the statement said. “Unfortunately, the risks associated with the COVID-19 pandemic are simply too great for our students, faculty, staff and neighboring community.”

The cases at Temple have been the cause of a recent uptick in cases recorded in Philadelphia. The city has worked with the university’s health services department to identify the students who have tested positive and conduct contact tracing. Health Commissioner Thomas Farley said many of the students testing positive live in off-campus housing and could present a threat for community spread. Earlier this week he urged those students to act as if everyone they are in contact with is infected. Farley said they should self-quarantine and leave their homes only for essential needs for now.