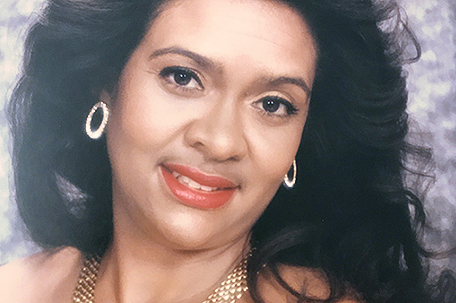 Earlier this month, family and friends from across the globe gathered to celebrate the life and legacy of Martha Rivera Chavis, the wife of National Newspaper Publishers Association president and CEO Benjamin Chavis Jr., in a multicultural service held just a few blocks from her Montclair, New Jersey home.

Rivera Chavis died on July 6 due to complications of heart failure. She was 53. Memorial services were held at Martin’s Home for Service, Inc. on July 11; the printed program featured her obituary in English and Spanish.

“This has been very sorrowful and painful for our family,” Benjamin Chavis said. “While we cry for the loss of our beloved, we’re also here tonight, to celebrate Martha’s life. Knowing my wife, as I did for the last 30 years, she would want me to say to you, enjoy this day that the Lord has made and celebrate what God has blessed us with through her spirit and through her presence.”

Many of the speakers during the memorial service met Martha and Dr. Chavis in the late 80s, when Dr. Chavis served as the executive director for the United Church of Christ’s Commission for Racial Justice (CRJ) in New York City.

Newark, New Jersey Mayor Ras Baraka, who was a student at the time, offered his condolences. Baraka said that the couple did a lot for the Black community in the United States and for Black people around the world, especially those who were oppressed and struggling.

“You and your wife worked together as a unit, which is an example for many of us. Sometimes we work, but our wives are not present,” said Baraka. “Martha was very present and ensured that she was present all the time. Martha is an example for many women out here of all nationalities; Martha was an internationalist and a very conscious and very brilliant woman. Today, we just don’t get that; you get one or the other. Martha was the whole package.”

Author and activist Sister Soulja also said that she met Dr. Chavis, when she worked at CRJ — before he met Martha.

“It’s very nice when you see a woman who is just 1000 percent behind her man; that was one of the most beautiful things about her,” Sister Soulja said.

“When death comes, it is a time to celebrate life and to thank God for the life that has been given, for whatever time it was given,” said Muhammad. “Every day with the Lord is like a thousand years, so for these 53 years of our beloved sister’s life, celebrate it and honor it.”

Min. Abdul Hafeez Muhammad also noted the importance of women in society and in the work of the Hon. Elijah Muhammad.

“Where there are no decent women, there will be no decent girls; a nation can rise no higher than its women,” he said, speaking directly to the Chavis children seated in the front row.  “Your mother can never die, because of the work she did from San Pedro to Angola to America and worldwide, she stood by [Dr. Chavis’] side, around him, behind him and in front of him and she put you on this planet. Because of her children, Martha Rivera Chavis will live forever, by the grace of God.”

Loved ones honored Martha’s family and life’s work offering thanks and remembrances in English and Spanish. Dr. Chavis met Martha when she worked as a translator for the Ambassador of Angola; she spoke Spanish, Portuguese, French, Italian and English.

Ana Jacobo said that Martha was more like an older sister than an aunt.

Rubby Perez, a family friend and world-renowned singer from the Dominican Republic, honored Martha with two songs in Spanish, “Amor Mio,” and “Hay Momentos.” Perez wanted to sing “Hay Momentos” at his father’s funeral, but because he wasn’t able to sing that day, he wanted to make sure that he performed it at Martha’s service.

Perez said that Martha Rivera Chavis had the unique ability to make people feel good even when she was feeling sad.

After the ceremony, family and friends gathered outside to take pictures as songs like Whitney Houston’s “I Wanna Dance with Somebody,” Faith Evans “Love Like This,” and Gloria Estefan’s “Rhythm Is Gonna Get You” played through the speakers on the warm, summer day.

“She brought happiness to people,” Perez said. “She was a humble giving person; she was a provider.”

John Chavis, one of Martha and Dr. Chavis’ sons, said that he’ll always remember his mother’s kind heart and willingness to help anyone. About a week before she died, his mom was looking out of her window and saw an African American woman trudging up Union Street with a heavy basket on her back attached to a leather tumpline. The midday sun was sweltering.

John said that his mother yelled to the woman, “Excuse me, do you want a bottle of water, sweetie?”

Even though she wasn’t feeling well, she came outside in her pajamas, crossed the street and gave the lady a cold bottle of water, John said.

“Even when she was sick my mom was still a humanitarian, still looking to help people,” said John. “That’s one memory that will last with me forever: her legacy of being a humanitarian.”

Dr. Chavis thanked Jim Farmer of General Motors; the Murphy, Falcon and Murphy law firm in Baltimore, hip-hop and business mogul Russell Simmons; the President of the Detroit branch of NAACP Rev. Dr. Wendell Anthony and many others for their contributions and generosity.