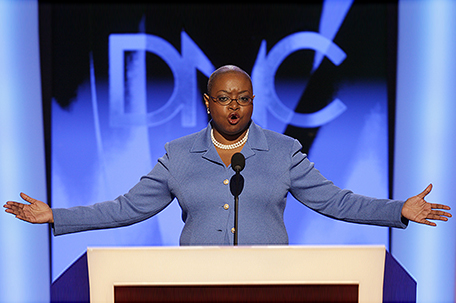 Daughtry, 52, who splits time between Washington, D.C., and Brooklyn, New York, served in the position in 2008 in Denver, Colorado, when Barack Obama was elected the first Black president of the United States.

“We are thrilled to have Leah Daughtry return to lead our convention team. She will bring so much expertise and enthusiasm to this important event,” Wasserman Schultz said in a prepared statement.

Daughter of activist and pastor the Rev. Herbert Daughtry of the House of the Lord Church, Daughtry works as a minister herself in Washington.

She also has strong roots in the Democratic Party, holding various senior posts at the United States Department of Labor during the Clinton administration, including senior advisor to the secretary, chief of staff, and lastly, acting assistant secretary for Administration and Management, with oversight for the development of the Department’s management programs and policies, including responsibility for the Department’s $35 billion budget, according to a bio at Harvard University Institute of Politics, where she served as a fellow in 2009.

“I could not be more excited to lead the Democratic Convention team,” Daughtry tells NewsOne.

She took a break from her busy schedule to answer a few questions about her plans for the 2016 election, whose DNC convention will take place on July 25 in Philadelphia, Pennsylvania.

Leah D. Daughtry: I’ve been involved in Democratic Party politics for most of my life and I always look forward to the presidential season. I think this is my seventh or eighth time.

I look forward to the debate on the issues, whether it’s minimum wage, education, health care, immigration reform, or families struggling to make ends meet in these trying times. I’m looking forward to those discussion and debates that will happen between our candidate and the other side, whether it’s Republican senators Rand Paul (of Kentucky-R), Ted Cruz of Texas, [who declared his candidacy], or Marco Rubio of Florida. I’m looking forward to seeing those differences highlighted over the next 18 to 24 months.

NO: Will the Democratic Party be able to maintain its diverse pool of voters in 2016, or will the GOP be able to capture some of those numbers?

LD: The strength of the Democratic Party is its diversity. Our diversity comes from those who are sophisticated and knowledgeable and know how to weigh the issues. I believe that the contrasts between Democrats and Republicans are going to be so stark, especially when you look at Republican candidates Paul, Rubio, and Cruz, who want to repeal Obamacare at a time when folks are desperate for affordable and accessible health care. When you look at conservative candidates who are opposed to comprehensive immigration reform, and raising the federal minimum wage when folks are struggling to make ends meet, again the contrasts are stark. People of color and people of diverse backgrounds will look at that, size up the candidates and say, “the Democratic Party best supports my interests.”

We do not take our voters for granted. We will go into every state, make our case and ask for votes. If we do that, we will be victorious in November 2016.

NO: When asked, you roundly criticized Republican religious reform measures in Indiana and Arkansas that tried to discriminate against gays until a backlash prompted lawmakers to redraft the laws in recent weeks.

LD: It’s distressing to see discrimination codified into law. As an African-American woman, I’m particularly sensitive to laws that make some folks more important than others, or attempt to diminish or demean a particular community. As Democrats, that’s not something we value or something we advance.

NO: You come from a faith background. Can you talk a bit about that?

LD: Yes, I am a fifth generation pastor. My family’s pastoral history dates back to the days of slavery and I am proud to be a pastor. My faith is the guiding principle in my life. Everything that I do is built on the foundation that I learned from my father, grandfather, and great-grandfather and the biblical text. All of that guides me and leads me in the work that I do everyday, including for the Democratic Party.