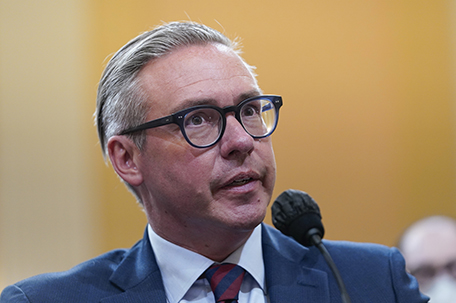 ABOVE PHOTO: Al Schmidt, former city commissioner of Philadelphia, testifies as the House select committee investigating the Jan. 6 attack on the U.S. Capitol continues to reveal its findings of a year-long investigation, at the Capitol in Washington, Monday, June 13, 2022. (AP Photo/Susan Walsh)

HARRISBURG, Pa. — A former Philadelphia election official who has told of enduring death threats for defending the city’s 2020 vote-counting against former President Donald Trump’s lies will be nominated for the top election administration post in Pennsylvania.

Al Schmidt will be nominated to be Pennsylvania Gov.-elect Josh Shapiro’s secretary of state, the campaign said Thursday, setting him up to oversee what is expected to be a hard-fought 2024 election in the critical presidential battleground.

Shapiro, a Democrat, made the post his first Cabinet selection to be publicly announced ahead of his Jan. 17 inauguration.

Protecting elections and voting rights was central to Shapiro’s campaign, as he emphasized his intention to nominate a “pro-Democracy” secretary of state and his role, as attorney general, in fighting efforts in court by Trump and his allies to overturn the 2020 presidential election.

“Al Schmidt has a proven track record of defending our democracy, protecting voting rights and standing up to extremism — even in the face of grave threats,” Shapiro said in a statement.

Schmidt, 51, is a Republican, fitting in with Shapiro’s theme of fashioning a bipartisan administration in politically divided Pennsylvania.

Schmidt is currently president and CEO of the Committee of Seventy, a good-government group in Philadelphia. Before he joined the group a year ago, Schmidt spent a decade as a Republican elected to the three-member board that oversees elections in Philadelphia.

Holding the post of secretary of state is subject to confirmation in the Republican-controlled Senate.

The $165,000-salary job involves overseeing how the state’s 67 counties run their elections, giving them guidance and assistance on how to manage it — a task that has grown in complexity with the advent of the state’s no-excuse mail-in voting law and conspiracy theorists inspired by Trump’s lie that the 2020 election was stolen from him.

The department also administers a long list of professional licensing commissions that report to the department.

In 2020, Schmidt became the face of Philadelphia’s protracted vote count when Trump and his campaign repeatedly claimed that “bad things happen in Philadelphia” and spread lies to sow doubt about the legitimacy of the election in the heavily Democratic city.

Few, if any, Republicans came to Schmidt’s defense during a time when he has said he received Trump-inspired death threats against him and his family that he has called “domestic terrorism.” No lawsuit, prosecutor or election worker has produced evidence of widespread fraud in Philadelphia’s 2020 election.

In the wake of the election, Schmidt testified in front of a U.S. Senate committee and the congressional committee investigating the Jan. 6, 2021, attack on the U.S. Capitol.

He has since become a prominent critic of what he has called the “vicious cycle” of conspiracy theorists and politicians who spread lies about elections.

The falsehoods prompt deceived constituents to demand that politicians do something — usually resulting in a push to restrict voting rights and violent threats to election workers, Schmidt has said.