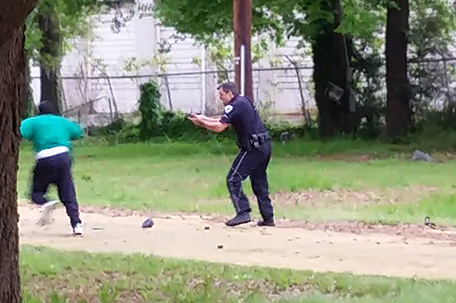 ABOVE PHOTO:  A frame from video provided by Attorney L. Chris Stewart representing the family of Walter Lamer Scott, Scott appears to be running away from City Patrolman Michael Thomas Slager, right, in North Charleston, S.C. Slager was charged with murder Tuesday, hours after law enforcement officials viewed the dramatic video that appears to show Slager shooting a fleeing Scott several times in the back. (AP Photo/Courtesy of L. Chris Stewart)

COLUMBIA, S.C.  — A White former South Carolina police officer planned to plead guilty Tuesday to violating the civil rights of an unarmed Black motorist he shot and killed as the man ran from a 2015 traffic stop, according to a copy of the plea agreement obtained by The Associated Press.

The 13-page document also notes that as part of the deal, state prosecutors would drop a pending murder charge against Michael Slager, effectively bringing to a close both parallel cases against the former North Charleston police officer.

Slager, 35, had been scheduled to appear in federal court Tuesday for motions ahead of his federal trial planned for later this month in the April 2015 death of Walter Scott.

A bystander captured Scott’s shooting on cellphone video, which was viewed millions of times. The 50-year-old motorist was running from Slager following a traffic stop when the two men struggled over Slager’s Taser before the officer shot at Scott eight times, hitting him with five bullets in the back. 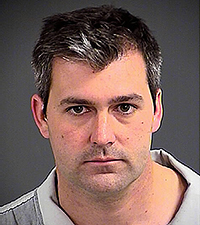 The White officer’s shooting of an unarmed Black man brought fresh scrutiny to the treatment of Black men by White officers across the nation.

In March, a federal judge ruled that jurors in Slager’s federal trial would be allowed to view the video, over objections by his defense attorneys.

Despite failing to secure a conviction against Slager last year when his murder trial ended in a hung jury, state prosecutors had been planning to retry him later this year. The deal, which also drops the two remaining federal charges against Slager, drops his pending murder charge.

Slager could face a possible life sentence, as well as $250,000 in fines, when he’s sentenced by a federal judge. That hearing will likely come after federal officials spend several weeks preparing a presentencing report.

In the agreement, federal prosecutors agreed to recommend Slager receive a reduction in his possible offense level, meaning he would get less than the maximum sentence.