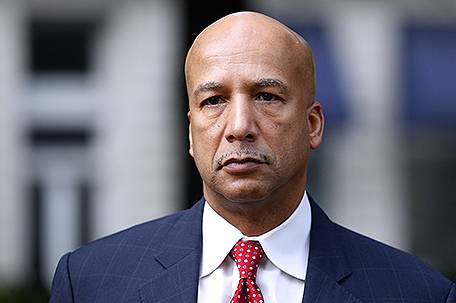 Former New Orleans Mayor Ray Nagin, who led the city during its darkest days after Hurricane Katrina, will be thrust back into the spotlight this week when he goes on trial in a corruption case that mushroomed at the end of his eight-year tenure.

Even before the allegations, Nagin’s popularity steadily eroded as the city struggled to recover from Katrina’s devastation, and he has kept a low profile since leaving office in 2010. Nagin was living in a Dallas suburb when a grand jury indicted him a year ago on charges he accepted free trips and more than $200,000 in bribes from contractors in exchange for helping them secure lucrative city contracts.

The investigation has already produced convictions or guilty pleas by former Nagin associates who could be key prosecution witnesses at the trial, which is scheduled to start Monday with jury selection.

Nagin’s 21-count indictment includes bribery and wire fraud charges, each of which carries a maximum penalty of 10 years and 20 years in prison, respectively.

More than a year before he left office, the Democrat vowed that he would retire from politics at the end of his second term. He kept that promise, surfacing only occasionally for speaking engagements and to promote a self-published memoir about his Katrina experiences.

Clancy Dubos, co-owner and political columnist at the Gambit weekly newspaper in New Orleans, said the trial could be cathartic for residents who hold Nagin responsible for the sluggish pace of the city’s recovery.

“I think his trial represents the final chapter — at least in the political sense — in the debacle after Katrina,” he said. “Everybody just wants to put it behind us. I think we want to forget about it, but I don’t think we’re ready to forgive.”

A former cable television executive, Nagin was an unknown political novice before he was elected mayor in 2002 with a promise to crack down on corruption.

Joe Pappalardo, a 65-year-old lifelong resident of New Orleans, voted for Nagin in his first election but didn’t support his second bid, losing confidence in his post-Katrina leadership. Pappalardo said he wouldn’t get any satisfaction out of a lengthy prison sentence for Nagin but hopes the jury holds him accountable for any crimes he committed.

“He has failed to acknowledge that he should take some responsibility for some of the problems we had,” Pappalardo said after casting an early ballot in the city’s mayoral election, which will be held Feb. 1. Incumbent Mayor Mitch Landrieu, whom Nagin defeated in 2006, is considered a heavy favorite to win re-election.

Ed Chervenak, a political science professor at the University of New Orleans, said Nagin’s early approval ratings were around 80 percent and fell to about 60 percent before Katrina — still high enough for him to be confident of a 2006 re-election.

Then came the 2005 storm. His blunt words and occasionally cringe-inducing remarks helped make him one of the nation’s most recognizable mayors, but he also became a divisive figure in the city.

In 2006, Nagin famously declared that the slowly repopulating city would be “chocolate” again, playing to black residents’ fears that they would get short shrift during the recovery process. After receiving 38 percent of the black vote in 2002, he got 90 percent in 2006, helping him defeat then-Lt. Gov. Landrieu in a runoff.

But his popularity, as measured in a University of New Orleans poll, plummeted to 24 percent during a second term marred by the slow recovery, the mounting federal investigation and a contentious relationship with the City Council.

Many recovery plans seemed incomplete. Nagin’s recovery chief, Ed Blakely, had vowed that New Orleans residents would see “cranes in the sky,” but promises of progress never seemed to materialize.

“He would come up with these ideas, but never really follow through,” Chervenak said.

Dubos said Nagin didn’t have anybody around him who knew government.

“He didn’t trust politicians, so he misplaced his trust in some of these other people who came along,” Dubos said.

One of those people, a former member of Nagin’s inner circle, was Greg Meffert. He served as a technology official and deputy mayor under Nagin and pleaded guilty in 2010 to taking bribes and kickbacks in exchange for steering city contracts to businessman Mark St. Pierre.

St. Pierre was convicted in May 2011 of charges that include conspiracy, bribery and money laundering. Nagin’s indictment accuses the former mayor of accepting bribes from St. Pierre.

Other targets of the probe have cooperated with authorities. Anthony Jones, who served as the city’s chief technology officer in Nagin’s administration, also pleaded guilty to taking payoffs.

Nagin’s indictment says he accepted more than $160,000 in bribes and truckloads of free granite for his family business in exchange for promoting the interests of local businessman Frank Fradella. Nagin also was charged with accepting at least $60,000 in payoffs from another businessman, Rodney Williams, for his help in securing city contracts.

From several city contractors, Nagin accepted free travel and vacation expenses for trips to Hawaii, Chicago, Las Vegas and Jamaica while in office, according to his indictment.

Nagin also is accused of getting free private jet and limousine services to New York from a businessman who owned a New Orleans movie theater. Nagin was accused of agreeing to waive tax penalties the businessman owed to the city on a delinquent tax bill in 2006.

The allegations aren’t limited to his tenure as mayor. Prosecutors said Nagin accepted monthly payoffs from Fradella totaling $112,250 after he left office.

Aaron Bennett, a businessman awaiting sentencing in a separate bribery case, told The Times-Picayune that he introduced Nagin to Fradella specifically to help the mayor get a Home Depot contract for granite installation work for a business that Nagin and his sons founded. Fradella’s company received more than $4 million in city contracts for repair work at Louis Armstrong New Orleans International Airport and in the French Quarter after Katrina.

Nagin attorney Robert Jenkins tried in vain to persuade a judge to dismiss the indictment, arguing the case was tainted by the online activities of at least two federal prosecutors who acknowledged posting anonymous comments on a newspaper’s website about cases, judges and politicians, including Nagin. Former U.S. Attorney Jim Letten, whose office is prosecuting Nagin, resigned in December 2012 amid the online commenting scandal.

After losing to Nagin in 2006, Mitch Landrieu was elected mayor in 2010. He is seeking a second term on Saturday’s ballot.