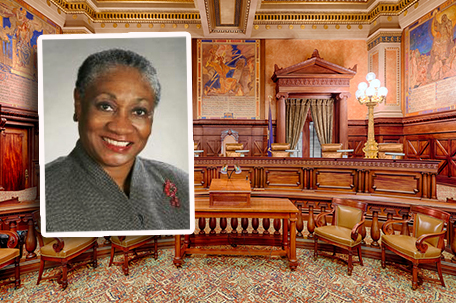 HARRISBURG, Pa. (AP) — A Black woman who is a former justice on the Pennsylvania Supreme Court has released a sworn affidavit that accuses the court’s chief justice, Thomas Saylor, of complaining to another judge about “her minority agenda.”

Saylor, who is white, denied making the comments, and in a statement through the court’s offices called the allegation “false and offensive.”

The alleged comment by Saylor came in 2012 to a judge in the context of a forthcoming disciplinary complaint against Baldwin. That disciplinary process ended in her being publicly reprimanded by the state’s high court over her work as Penn State’s chief counsel during the Jerry Sandusky scandal. Baldwin contested and fought the complaint, saying she was treated unfairly.

“If the affidavit is as sworn, it shows bias and vindictiveness” in the disciplinary process against her, Baldwin said in an interview Friday.

The affidavit recounts a 2012 conversation between Saylor and a former Northumberland County Court judge, Barry Feudale, who oversaw the grand jury investigation into Sandusky.

Speaking at a judicial conference in Hershey, Saylor told Feudale that a disciplinary complaint was forthcoming against Baldwin in connection with the Sandusky investigation, and Saylor urged Feudale to help the inquiry, the affidavit says.

Saylor told Feudale that Baldwin “caused us a lot of trouble when she was on the Supreme Court with her minority agenda,” it says.

Feudale signed the sworn affidavit last August. Baldwin said she had no knowledge of the affidavit or Saylor’s alleged comments until her lawyers in the disciplinary case received it from Feudale.

Feudale declined to comment to the Inquirer, although Feudale’s one-time lawyer, Samuel Stretton, said Friday that Feudale had previously described the conversation to him.

In a statement issued through the court, Saylor “categorically denies making any statements about Justice Baldwin causing ‘trouble’ on the court due to a ‘minority agenda.’”

Baldwin, 75, a Democrat, served on the high court in 2006 and 2007 as an appointee of then-Gov. Ed Rendell. She later became chief counsel for Penn State.

Saylor, 73, a Republican, has served on the court since 1997 and became chief justice in 2015. All seven current justices are white.

Baldwin received a reprimand in February by the high court over a complaint that she violated professional rules for lawyers by testifying about university officials accused in the Sandusky scandal in front of an investigating grand jury after she appeared with them in front of the panel. Feudale went on to write an opinion defending Baldwin’s actions as proper. Saylor recused himself from Baldwin’s disciplinary complaint before the Supreme Court voted 4-0 to discipline her.

The state Supreme Court removed Feudale from his role overseeing statewide grand jury investigations in 2013 at the request of the state’s then-attorney general, Kathleen Kane. The high court also declined to reappoint him as a senior county court judge.