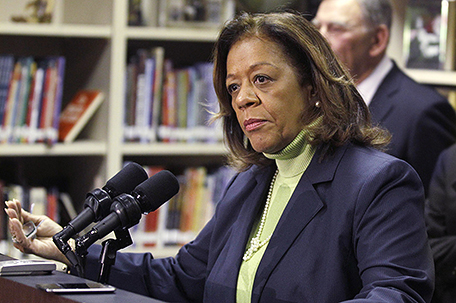 ABOVE PHOTO:  Barbara Byrd-Bennett speaks at a news conference in Chicago in 2012. The former Chicago Public Schools CEO has been indicted on corruption charges following a federal investigation into a $20 million no-bid contract.  (AP Photo/M. Spencer Green, File)

CHICAGO — The former head of Chicago Public Schools pleaded guilty Tuesday to charges in an alleged scheme to steer $23 million in no-bid contracts to education firms for $2.3 million in bribes and kickbacks.

Barbara Byrd-Bennett, who ran the nation’s 3rd largest school district for nearly three years, had faced 20 fraud counts, each with a maximum 20-year prison term. However, she pleaded guilty to one fraud count in federal court in Chicago. In exchange, prosecutors will dismiss all the other counts.

U.S. District Judge Edmond Chang will sentence the 66-year-old at a later date.

Appearing tense and her voice subdued, Byrd-Bennett stood unmoving before the judge, answering questions with, “Yes, you your honor.”

Mayor Rahm Emanuel hired Byrd-Bennett as CEO in 2012, and she resigned earlier this year.

CPS is facing a steep budget shortfall and a severely underfunded pension system, as well as lingering criticism after dozens of schools were closed in 2013 in what Emanuel and education officials argued would help focus resources and improve the school system.

The indictment alleges the owners of two education service and training companies’ offered Byrd-Bennett a job and a hefty one-time payment – disguised as a lucrative signing bonus – once she left CPS.

“If you only join for the day, you will be the highest paid person on the planet for that day,” one of the executives wrote in an email about the bonus, according to the indictment.

The indictment also alleges Byrd-Bennett expected to receive kickbacks worth 10 percent of the value of the contracts, or about $2.3 million. It’s unclear how much money was ever set aside, though the indictment says trust accounts tied to her relatives – identified as Relatives A and B – were set up to hide the money.

Prosecutors allege the scheme started in 2012, the same year Emanuel hired Byrd-Bennett for the high-profile post. At the time, the Democratic mayor said he was proud of his choice.

She stepped down about four months ago after word spread about a federal investigation into a contract between the district and SUPES Academy, a training academy where she once worked.

Company owners Gary Soloman and Thomas Vranas are accused of offering her money along with sporting event tickets and other kickbacks in exchange for the contracts. Both suburban Chicago men face multiple charges, including bribery and conspiracy to defraud. The indictment charges SUPES Academy and a subsidiary, Synesi Associates LLC, which specialize in training principals and school administrators.

In an email sent to Soloman on Sept. 10, 2012, Byrd-Bennett wrote about her apparent eagerness to make money: “I have tuition to pay and casinos to visit.”

Soloman’s attorney said in a statement last week that Soloman has cooperated in the investigation and stands behind his companies. He said Solomon has acknowledged “certain errors” in judgment. Vranas and his attorney didn’t comment after the indictment.

CPS suspended its contract with SUPES Academy and confirmed it had been subpoenaed shortly after Byrd-Bennett announced she was taking a paid leave of absence in April, about two months before she resigned.

As a condition of her release, the judge said Byrd-Bennett would have to provide a DNA sample. He also set the next status hearing for Jan. 27.