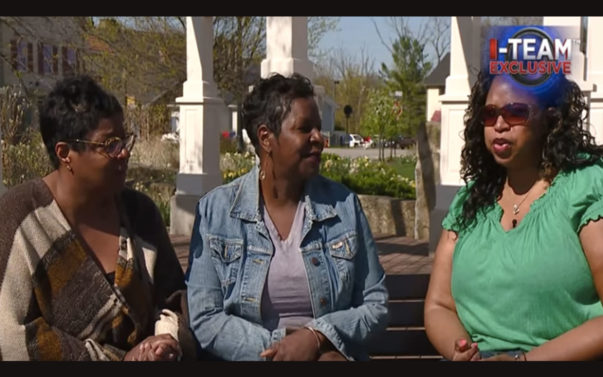 Ebony Magazine–The family of a 74-year-old man who was shot and killed on Easter Sunday met with the killer’s former girlfriend, CNN reports.

Nearly two days after Steve Stephens fatally shot Godwin in cold blood, two of his daughters met with Joy Lane for the first time. Godwin was walking down a Cleveland, Ohio, street when Stephens gunned him down, then posted a video of the shooting on Facebook.

He was chosen at random. Before the shooting, Stephens demanded that he say “Joy Lane,” the name of his ex-girlfriend.

“She’s the reason that this is about to happen to you,” Stephens told the elderly father of nine in the video. He then shot him.

Lane met with Debbie Godwin and Tonya Godwin-Baines on Tuesday. There was reportedly no finger pointing or blame, just mutual grief over the ordeal.

A five-state manhunt was launched to find Stephens after the children’s mental health worker vowed to “keep killing until they (police) catch me.”

Stephens was found dead as a result of a self-inflicted gunshot wound after being spotted by police in Western Pennsylvania, officials say.

“The hashtags Joy Lane, Joy Lane massacre—I don’t even know who Joy Lane is anymore or how to pick up all the pieces of my world at this moment,” she told a CNN affiliate. “I’ve got a lot of negative comments. Some even said he should have killed me.”

Lane said her and Stephens were romantically involved for a while and had discussed getting married. But they ended their relationship and she pushed for him to seek help for issues with gambling. They last spoke on Saturday evening, Lane said, when he told her he was moving out of state and had quit his job.

The Godwin sisters told Lane that none of this was her fault and that they don’t hold any animosity for her. Several of the Godwin children have also stated that they held no ill will towards Lane.

“Each one of us forgives the killer, the murderer,” Godwin-Baines said Monday.

Godwin will be laid to rest this Saturday.