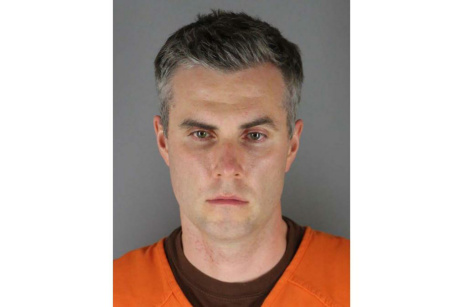 ST. PAUL, Minn. (AP) — A federal judge sentenced former Minneapolis police Officer Thomas Lane to 2 1/2 years in prison Thursday for violating George Floyd’s civil rights, calling Lane’s role in the restraint that killed Floyd “a very serious offense in which a life was lost” but handing down a sentence well below what prosecutors and Floyd’s family sought.

Judge Paul Magnuson’s sentence was just slightly more than the 27 months that Lane’s attorney had requested, while prosecutors had asked for at least 5 1/4 years in prison — the low end of federal guidelines for the charge Lane was convicted on earlier this year. He said Lane, who faces sentencing in September on state charges in Floyd’s killing, will remain free on bond until he must turn himself Oct. 4.

Lane, who is white, held Floyd’s legs as Officer Derek Chauvin pinned Floyd for nearly 9 1/2 minutes on May 25, 2020. Bystander video of Floyd, who was Black, pleading that he could not breathe sparked protests in Minneapolis and around the world in a reckoning over racial injustice over policing.

Two other officers, J. Alexander Kueng and Tou Thao, were also convicted of violating Floyd’s civil rights and will be sentenced later