Ethiopian leader sparks euphoria during a whirlwind U. S. trip 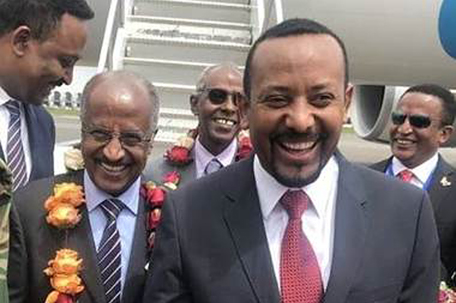 It’s been called “Abiy-mania” – an impulse to reach out and hug the young new Prime Minister of Ethiopia, Abiy Ahmed, who brought an end to his country’s two-decade-long war with Eritrea and other sweeping changes in the Horn of Africa.

This month, the 41-year-old Ethiopian leader landed in the United States where he met with thousands of his countrymen and women and reiterated his message of love and unity.

“He urged them to tear down the wall of hatred and bring home the culture of innovation that Los Angeles is known for,” his chief of staff wrote on Twitter.

His six-day journey took him to Washington,D.C., Los Angeles and Minneapolis, where “Kassa”, a researcher at North Carolina State University was heard to exclaim: “I want to hug him! He’s a hugger, I know, so I want to hug him.”

Abiy’s call to the Diaspora seems to have already softened the fiercest critics of the ruling party’s previous regime.

Among them was Abede Yimenu, a former major in the Ethiopian army and one of the 300,000 Ethiopians who live in the District of Columbia. He told the Washington Post he is also thinking of going home after being away for 17 years.

Abiy also met with the leader of Patriotic Ginbot 7, an opposition group named for May 15, the date of a general election in 2005 marred by fraud and the deaths of about 200 people. The pro-democracy party was labeled a terrorist organization by the former government.

Aside from the peace treaty with neighboring Eritrea, Abiy has lifted the state of emergency and freed hundreds of political prisoners.

Before embarking for the west coast, Abiy met with the head of the World Bank, the IMF and Vice President Mike Pence.  He also oversaw the reconciliation of rival synods of the Ethiopian Orthodox Church, and met the Muslim community.

The new prime minister has the advantage of speaking fluent Oromo, Amharic, and Tigrinya. He is also steeped in Islam and the traditions of the Orthodox Church. There is something to satisfy each element of the coalition, which controls all of Parliament.

Ethiopia to Ban All International Adoptions After High-Profile Abuse Cases