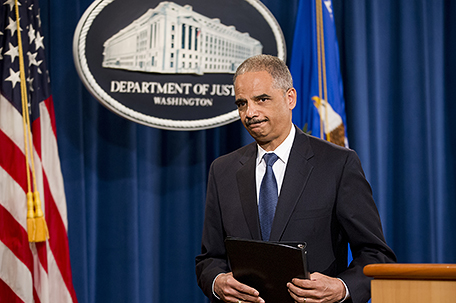 Attorney General Eric Holder leaves after speaking where he expressed disappointment in the Supreme Court’s 5-4 ruling in the Alabama voting rights case, Shelby County v. Holder, Tuesday, June 25, 2013, at the Justice Department in Washington. The court declared unconstitutional a provision of the landmark Voting Rights Act that determines which states and localities must get Washington’s approval for proposed election changes. (AP Photo/J. Scott Applewhite)