‘Embedded in our communities’ 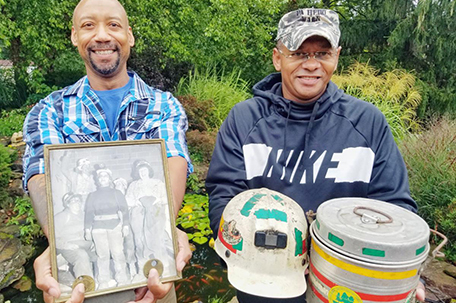 ABOVE PHOTO: Wendell Tyler holds a photograph of his mother, Karen, who is pictured in the center with several other female coal miners in an undated photo while his brother, Carmen, displays their mother’s helmet and tin bucket. Karen Tyler is believed to be the first female coal miner in Pennsylvania when she started at Bethlehem Mines near Ellsworth in August 1974.  (Photo: Mike Jones/Observer-Reporter)

The local and state newspaper coverage that matters most to Pennsylvanians connects readers and journalists.

Karen Tyler wanted to become a coal miner, just like her father and grandfather.

When she heard in 1974 that Bethlehem Mines near Ellsworth was hiring women, Tyler was eager to grab a helmet and descend far beneath the Washington County hills. Family members worried for her safety, but Tyler pushed on and became what is believed to be the first female miner in Pennsylvania. Hers was a story perfect for the telling over Labor Day weekend, a story that journalist Mike Jones shared with readers of the Washington, Pennsylvania-based Observer-Reporter. The tale of this fearless pioneer, who died at age 71 in 2020, was told with the help of Tyler’s proud sons who wanted to honor their mother’s legacy. Her story, in turn, was a poignant reminder of readers’ shared heritage.

Like other newspapers across the state, the Observer-Reporter impacts the communities it serves with news and information that make a difference in their lives. And they do it daily through print newspapers, news websites and other digital offerings.

No event better demonstrates their relevance than the ongoing coverage of the coronavirus pandemic.

Reporters like Jones have spent more than a year and a half providing readers with critical answers to questions to help them safely navigate the public health crisis. Are workers safe at their jobs? What are COVID-19 symptoms? How will schools handle remote learning? Are hospitals at capacity? How can people support local businesses? Will restaurants stay open? Where can the unemployed find support? Are vaccines available locally? What should everyone know about masks?

“That was a real baptism for us as a news organization,’’ Pennsylvania Capital-Star Editor-in-Chief John L. Micek said of the Harrisburg-based news website launched early in 2019. “There was never more of a sense that we had an obligation to get the story as right as any time in our lives.’’

News staffs worked remotely. Hours, especially over the first six to eight months of coverage, were long and government press conferences were many. Developing news stories often changed direction several times a day. Staffs collaborated via Zoom and phone. Reporters wrote articles in their cars, and from their kitchen tables.

“The newsroom is wherever your laptop is,’’ Jones explained.

In more typical nonpandemic times, he added, “Our newsrooms are the library, the local coffee shop, or wherever people come together.’’

The enduring relationship between “newsroom’’ and reader is clearly evident not only in the coronavirus coverage but also in a wide range of local news events that people care about.

Dennis Lyons, editor of The Daily Item in Sunbury, said the paper is “blessed with a staff that lives in, and knows, the community.’’ He said the paper’s 10-member community advisory board helps to ensure that local coverage is relevant and impactful.

Board feedback contributed to an article providing help for stressed teenagers and another on noise issues related to truck traffic on Route 45. Both are quality-of-life issues important to The Daily Item’s central Pennsylvania readers.

That is why the paper reported on the state acquisition of private land through eminent domain for the Susquehanna Valley thruway project. When a popular Dollar General store in Sunbury abruptly closed, The Daily Item filed a Right-to-Know request to find out why. The newspaper learned that there were structural issues with the building that needed to be fixed before the store could reopen, Lyons said.

“That answered a lot of questions on a lot of things for readers.’’

After the George Floyd murder, the paper produced stories and videos about what it was like to be a Black person living in a largely white community. “Black Lives Here’’ earned a public service award. A series published earlier this year, “Rx for Rural Health,’’ focused on how the lack of internet access, dental care and hospitals impede medical care. Without newspapers, Lyons said, “There would be nobody filing RTKs and holding government officials’ feet to the fire. It would be a complete lack of transparency of what was going on in our community. … I think that’s a frightening prospect.’’

He has led the Capital-Star, part of States Newsroom, for all of its 2½-plus years — though Micek has spent two decades of his working life covering Pennsylvania politics. The Capital-Star describes itself as a “nonpartisan, nonprofit news site dedicated to honest and aggressive coverage of state government, politics and policy.’’

“There’s never been a time when we’ve needed to know more about what our government is doing,’’ Micek said, citing ongoing coverage relating to the pandemic and the 2020 election. The fact that The Caucus, Spotlight PA, City & State Pennsylvania and the Capital-Star are now covering state politics indicates a “tremendous hunger for this kind of news.’’ Micek describes his statewide community of readers as diverse, questioning.

“They want to know what’s going on,’’ he said. And they understand that state government impacts much of their lives: school funding, professional licensure, road repairs, criminal justice reform, the opioid epidemic.

“I’ve been telling people a lot lately that power doesn’t need our help to get their message out,’’ Micek said, but those who don’t have that power look to the Capital-Star to see that their stories are being told.

“We care about what our readers care about,’’ he said. For the Observer-Reporter’s Jones, that means covering individuals charged for their roles in the Jan. 6 U.S. Capitol riot. Other assignments take him from murder trials to food banks to police incidents to county government proceedings to families like Karen Tyler’s.

“We are reporters embedded in our communities,’’ Jones said, acknowledging the impact his work can have on others. “There’s a lot of power in that, and a lot of responsibility.’’

Editor’s note: This article in observance of National Newspaper Week, Oct. 3-9, is from the Pennsylvania NewsMedia Association, the official trade organization representing more than 350 print, digital and news media-related members across the commonwealth.