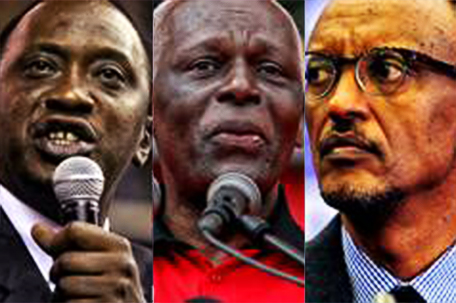 Rwandans go to the polls August 3-4. The undisputed favorite is the longtime president who has ruled since the end of the tiny nation’s horrific 1994 genocide.

Even the head of the European Union electoral commission said to the Voice of America (VOA) last month: “I think you would not lose any money if you bet on Mr. Paul Kagame.”

Still, the democratic exercise is an important one for Rwanda and its wealthy aid partners, says senior Horn of Africa analyst Murithi Mutiga of the International Crisis Group.

Elsewhere in East Africa, on August 8, voters in Kenya will choose between the incumbent, President Uhuru Kenyatta, son of Kenya’s first president, and Raila Odinga, whose father was a major liberation figure and the country’s first vice president.

The exercise is expected to be Africa’s most expensive on a cost-per-voter basis. Both public and private spending are at an all-time high, with both government and candidates spending hundreds of millions of dollars to secure the electoral process or campaigning to get elected.

In a comparison of cost per voter, Kenya’s 19.6 million voters will each cost the government $25.40. Rwanda will spend 5.5 billion Rwandan francs ($6.5 million). With 6.8 million registered voters, that’s less than a dollar per voter.

This will be 72-year-old Odinga’s last attempt at the presidency. If, as expected, Kenyatta’s Jubilee Alliance Party wins a narrow victory over Odinga’s National Super Alliance coalition, he could cry foul.

The southern African nation of Angola will hold its first vote in decades on August 23 without President Jose Eduardo dos Santos at the helm. The 74-year-old, who has recently taken several trips to Spain for medical reasons, is stepping down after 38 years in power.

The poll itself is a two-way race, between the longtime ruling party and the established opposition. The winner will lead a nation whose fortunes are heavily dependent on oil, which accounts for about 45 percent of the nation’s gross domestic product and 95 percent of exports. A slump in oil prices has hit the economy hard.

The new president will face a floundering economy and gaping inequalities with state resources largely controlled President dos Santos and his family.