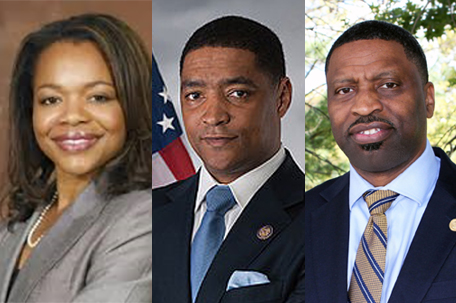 The Lawyers Committee for Civil Rights Under Law has filed suit against Georgia Secretary of State and Republican gubernatorial candidate Brian Kemp over the state’s “discriminatory and unlawful ‘exact match’ voter suppression scheme.”

The suit alleges that Georgia’s ‘no match, no vote’ voter registration scheme violates the Voting Rights Act, the National Voter Registration Act, and the First and Fourteenth Amendments to the United States Constitution,” according to a statement from the organization.

Meanwhile, Congressional Black Caucus Chairman Cedric Richmond has written a scathing letter to Attorney General Jeff Sessions strongly objecting to what appears to be his “abdication of his complete abdication of the Department of Justice’s (DOJ) voting rights oversight responsibilities” in the Georgia controversy.

NAACP President Derrick Johnson has announced that the historic civil rights organization is also monitoring the situation in Georgia, which he describes as “a stain on our system of democracy, when less than a month before an election which could produce the first African-American female governor in our nation’s history, we are seeing this type of voter suppression scheme attempted by a state official whose candidacy for the governorship produces an irremediable conflict of interest.”

The war for votes in the Nov. 6 election is on. And civil rights leaders across the country are fighting vigorously for each one. Despite the contention for political control of the U. S. House of Representatives, the historic gubernatorial election in Georgia is the ground zero of sorts as it tests fair elections after the 2013 Shelby v. Holder U. S. Supreme Court decision that outlawed the Section 5 pre-clearance clause, which once mandated Georgia and a list of other states to seek permission from the Justice Department before changing voting laws.

“Georgia Secretary of State Brian Kemp has been a driving force behind multiple voter suppression efforts throughout the years in Georgia,” said Kristen Clarke, president and executive director of the Lawyers’ Committee. “If there is one person in Georgia who knows that the ‘exact match’ scheme has a discriminatory impact on minority voters, it’s Brian Kemp because we successfully sued him over a mirror policy in 2016.”

In a nutshell, Kemp’s “exact match” policy has placed more than 53,000 voter registration applications on “pending” status a month before the midterm election. They are on hold because of simple typos or for not exactly matching the registrants’ official identification for any reason. Although Kemp contends that the 53,000 can still vote, lawyers state that just the implication that the vote may not count or that they may be question at the polls could cause Black voters to become skittish and stay at home.

There exists a stark parallel between the voter suppression schemes levied by states around the country prior to the Voting Rights Act of 1965 and the insidious tactics used by Secretary Kemp to capitalize on the Supreme Court’s decision in Shelby County to gut the Act and its protections for African- Americans and other people of color that came with it.  No less than 70 percent of people impacted by ‘exact match’ are African-American. We will continue fighting voter suppression to ensure a level playing field for voters across Georgia this election cycle.”

In his letter to Attorney General Sessions, CBC Chairman Rep. Cedric Richmond (D- La.) says Georgia is just a tip of the iceberg for voter suppression antics going on around the country.

“The current state of election integrity across the nation is in a tenuous position thanks to your intentionally lax approach to enforcement of voting rights laws. Bad actors in governments in various states have been deliberately compromising fair elections with impunity,” Richmond wrote.

The NAACP’s Johnson says the organization will continue to monitor Georgia closely after a major win against voter suppression in the state just two months ago. In August the NAACP Georgia State Conference successfully fought against the closing of seven of the nine polls in the nearly all Black area of Randolph County.

The Associated Press has reported that Kemp has “cancelled over 1.4 million voter registrations since 2012. Nearly 670,000 registrations were cancelled in 2017 alone.”

“We are closely monitoring this situation with our Georgia State Conference President Phyllis Blake and demanding a complete investigation and full transparency prior to the election,” Johnson said.