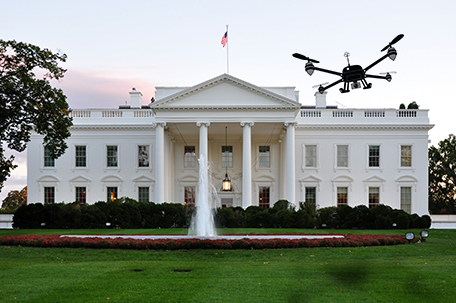 By Josh Lederman and Joan Lowy

WASHINGTON — A two-foot-long drone apparently flown by a hobbyist crashed on the White House grounds Monday in an extraordinary, if unintended, breach that raised fresh questions about the president’s security — and a growing threat from the sky.

A man later came forward to say he was responsible for the mishap in the middle of the night and hadn’t meant to fly the drone over the complex, officials said. “Initial indications are that this incident occurred as a result of recreational use of the device,” said Secret Service spokesman Brian Leary.

President Barack Obama and his wife, Michelle, were overseas when the quadcopter struck the southeast side of the grounds at about 3 a.m. Daughters Sasha and Malia stayed behind in Washington; it was not known whether they were at the mansion.

Officials believed the intrusion to be the first of its kind on the White House grounds, although not the first in the vicinity.

Low-flying drones like the quadcopter — a craft lifted by four propellers — have become increasingly sophisticated and affordable instruments that authorities worry could also become tools for terrorists or others meaning to do harm.

Police, fire and other emergency vehicles swarmed the White House just after the crash, with several clustered near the southeast entrance to the grounds. The White House was dark and the entire perimeter was on lockdown until around 5 a.m. when those who work there were allowed inside.

After daylight, more than a dozen Secret Service officers fanned out in a search across the White House lawn as snow began to fall. They peered down in the grass and used flashlights to look through the large bushes that line the driveway on the south side of the mansion.

The breach was bound to reinvigorate a long-running public debate about the use of commercial drones in U.S. skies — as well as concerns about White House security. At the urging of the drone industry, the Obama administration is on the verge of proposing rules for drone operations that would replace an existing ban on most commercial flights.

Although remote-controlled airplanes and related toys have been available for decades, the recent proliferation of inexpensive drones has prompted growing fears about potential collisions with traditional aircraft.

Technological advances have also made it easier to equip drones with advanced capabilities such as cameras, raising privacy issues as well as concerns that such devices could be used by terrorists to carry weapons.

The Federal Aviation Administration receives reports across the country nearly every day of drones operating near manned aircraft and airports or over densely populated areas, including previous incidents near the White House.

In one, police arrested a man in August who got stuck in a tree at Freedom Plaza, several blocks from the White House, after he climbed up to retrieve his small drone, according a compilation of recent incidents by the FAA.

In July, a Secret Service patrol detained someone flying a small quadcopter near the White House and confiscated it. Other unauthorized drone flights have been reported near Andrews Air Force Base, used by presidential aircraft, near Bolling Air Force Base in Washington, near the Lincoln Memorial and over FedEx Field in Maryland outside the city.

Many small quadcopters are used for commercial operations like aerial photography and inspections as well as by hobbyists. Often weighing only a few pounds, they sell for as little as a few hundred dollars or less, and were popular Christmas gifts last year.

Whether a quadcopter can carry and fire a weapon depends upon how robust the drone is and how lightweight the weapon, industry experts say. Most commercially manufactured quadcopters are small, weighing 2 to 5 pounds and measuring 1 to 3 feet in length.

Paul McDuffee, vice president at drone-maker Insitu, said of the device that crashed: “Something of that size is going to be very limited in terms of what it can carry, probably down to a few ounces in payload.”

Even so, a small drone at low altitude is hard to intercept.

“There’s probably nothing they have that could stop it, particularly at night,” said James Lewis of the Center for Strategic and International Studies. “The sniper would be shooting at the drone and his bullets would be going past it into the buildings on Connecticut Avenue. If it’s a crisis or emergency, sure, that makes sense, but what goes up comes down, and that includes bullets.”

The episode joins a string of recent security breaches at the White House.

Four high-ranking executives were recently reassigned, and Julia Pierson was forced to resign as director last year after a Texas man armed with a knife was able to get over a White House fence and run into the mansion before being subdued.

An independent panel that investigated the agency’s leadership and practices after that incident and the disclosure of a previously unreported security breach recommended hiring a new director from outside.

In 1994, a disturbed pilot stole a Cessna and crashed it on the White House lawn near the mansion, killing himself. President Bill Clinton and his family were staying across Pennsylvania Avenue, at the Blair House, that night.

Airline pilots may get better security than President Obama