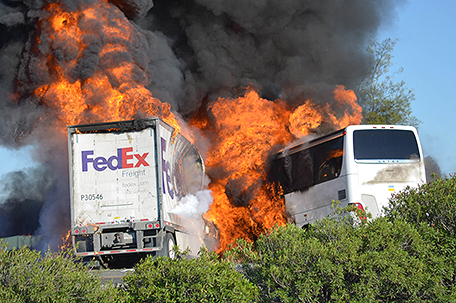 ABOVE PHOTO:  Massive flames engulf a tractor-trailer and a tour bus just after they collide on Interstate 5, Thursday, April, 10, 2014, near Orland, Calif. At least 10 people were killed in the crash, authorities said.  (AP Photo/Jeremy Lockett)

ORLAND, Calif. — It was a busload of opportunity: young, low-income, motivated students, destined to become the first in their families to go to college, journeying from the concrete sprawl of Los Angeles to a remote redwood campus 650 miles north.

Those dreams shattered for some Thursday in an explosive freeway collision that left 10 dead – students, chaperones and both drivers – and dozens hospitalized.

Desperate families awaited word about loved ones Friday, while investigators tried to figure out why a southbound FedEx big rig swerved across the grassy divide of California’s key artery before sideswiping a car and slamming into the tour bus, which burst into a furious blaze.

The Serrato family, whose identical twin 17-year-old daughters set off on the adventure on separate buses Thursday, had a panicked, sleepless night. Marisol made it to their destination, Humboldt State University, but there was no word from Marisa, who had been aboard the now-gutted bus.

Friday morning when a sheriff’s deputy asked for Marisa’s dental records, a grim request made to several families, 23-year-old brother Miguel Serrato said his family was “getting a little bit scared.” His mother booked a flight north.

Humboldt alumni Michael Myvett, 29, and his fiancee, Mattison Haywood, who were chaperoning, also were killed. Myvett was a therapist at an autism treatment center.

“He just died,” his grandmother Debra Loyd said, her voice breaking with emotion in the early afternoon Friday. “They have already confirmed it.”

Myvett’s manager Kyle Farris said he was “extraordinary,” and that he connected with their children “on a level few others could, and he contributed to their wellbeing in such a positive and profound way.”

“He will be greatly missed,” Farris said.

A Facebook photo shows Haywood flashing a shining diamond engagement ring on her finger and kissing Myvett in December near the Louvre Museum in Paris.

The bus was among three Humboldt had chartered as part of its two-day Preview Plus program to bring prospective students to tour the Arcata campus, according to university officials. Before launching the event Friday, university Vice President Peg Blake’s voice broke as she asked a crowded theater for a moment of silence in honor of everyone affected by the accident.

Most survivors were injured, some with critical burns or broken limbs. Those who made it out said they scrambled through a kicked-out window. One man, apparently an admissions counselor, was in flames and later died. Those who could sprinted, others staggered, in a desperate dash to the opposite side of Interstate 5 before the vehicle exploded.

“We knew we were in major trouble,” said Steven Clavijo, a high school senior from Santa Clarita, who was trying to nap when he felt the bus shake before a loud boom.

After he escaped, two more explosions followed. Clavijo and other survivors watched helplessly, knowing their peers were trapped in the inferno.

Explosions of orange flames engulfed both vehicles, and clouds of black smoke billowed into the sky until firefighters doused the fire, leaving behind scorched black hulks of metal. Bodies were draped in blankets inside the burned-out bus.

“I can only imagine the excitement of these high school students as they were on their way to visit a college campus, and the pride of the adults who were accompanying them,” said U.S. Secretary of Education Arne Duncan in a statement. “Our young people are our greatest treasure, and this loss is heartbreaking.”

Both drivers were killed, along with three adult chaperones and five teenage students, according to the California Highway Patrol, which reached the scene shortly after the 5:30 p.m. accident about 100 miles north of Sacramento. Rescuers said the bodies were mostly at the front of the bus, or outside on the ground in front of it.

Humboldt admissions counselor Arthur Arzola, 26, who recruited in the Los Angeles area, was among the dead. His passion for bringing kids to the university was evident on his “Meet the Counselors” webpage: Humboldt “provides all students on campus with incredible opportunities that change the world for the better.”

The 44 teenagers aboard, from dozens of different Southern California high schools, were participating in a program that invites prospective low-income or first-generation college students to visit Humboldt. They were supposed to join hundreds more potential students from across California and the West for a long weekend, paired up with existing students and staying in the dorms.

University president Rollin Richmond says they will welcome back the accident survivors at a time of their choice, “hopefully not on a bus.”

A first bus rolled up to the rural campus, lush with redwoods and springtime wildflowers, at 6:30 PM Thursday, and a second arrived after 9 PM.

Word began trickling in to the high schoolers, so far from home, when their panicked parents called them. The remote forest brought spotty telephone reception and lots of confusion.

The fact that the students were at a pivotal moment of their young lives exacerbated the tragedy for school officials.

“These injuries and loss of life are made all the more poignant by the fact that these students were preparing for college, poised on the edge of an exciting time full of possibility,” State Superintendent of Public Instruction Tom Torlakson said.

Los Angeles Superintendent John Deasy said the students were “about to visit a place that was obviously going to be a part of their dreams.”

Timothy White, chancellor of the 23-campus California State University system, said “these are the very students that California needs to be successful going forward.”

“And so we are doubly saddened by the fact that many of them are first generation and students from low income, who have done all the right academic things and had their dream of going to Humboldt State taken away by this tragic accident,” he said.

The bus was operated by Silverado Stages Inc., which is based in the central coast city of San Luis Obispo but operates buses throughout the West.

CEO Michael Vodarsik said only that the company was “working closely with authorities” and trying to support passengers and families of the dead.

FedEx Chairman Frederick Smith, in a statement, expressed his “deepest personal sympathies and the condolences of over 300,000 other FedEx team members to everyone involved in this accident.”

The CHP and the National Transportation Safety Board were investigating, but warned it could take months to conclude what happened.

Mark Rosekind, an NTSB member, said Friday that the agency would be gathering information over the next one to two weeks. He said it will review whether the stretch of California freeway where the bus was struck should have had a barrier along the median to prevent head-on collisions.

In addition, Rosekind said it will determine whether a fire suppression system recommended but not mandated for buses would have made a difference in the crash.