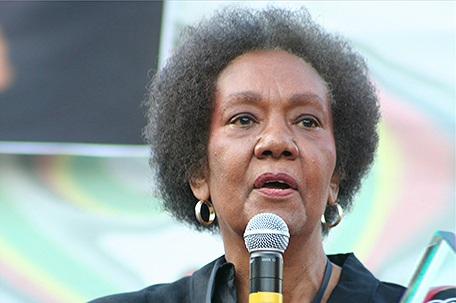 Dr. Frances Cress Welsing, the Black author and psychiatrist whose 1991 work The Isis Papers; The Keys to the Colors introduced the world to the “melanin theory” and the “neuroses” of white supremacy, has died. She was 80.

Welsing often explored the origins of White supremacy in her works, arguing that White people developed an aggressive manifestation to dominate society due to a biological mutation. Her research, while controversial, focused on White racism while offering the theory of Black superiority based on heightened levels of melanin.

In her 1970 essay “The Cress Theory of Color-Confrontation and Racism (White Supremacy),” Welsing wrote that “the quality of whiteness is a genetic inadequacy or a relative deficiency or disease based upon the inability to produce the skin pigments of melanin which are responsible for all skin color.”

“Acutely aware of their inferior genetic ability to produce skin color, whites built the elaborate myth of white genetic superiority. Furthermore, whites set about the huge task of evolving a social, political and economic structure that would support the myth of the inferiority of Blacks and other non-whites,” she wrote.

While her intellectual work has garnered praise from the Black community, her stance on homosexuality has been criticized. In the 1980’s Welsing wrote that homosexuality was a “white-imposed” attempt to discourage reproduction in Black families.

Dr. Welsing was born on March 18, 1935, in Chicago. Both her father and grandfather were medical doctors, and her mother was a teacher. She received her bachelor’s degree from Antioch College, and her M.D. from the Howard University College of Medicine. She published the “Cress Theory of Color-Confrontation” in 1974 wile an assistant professor of pediatrics at Howard.

According to Welsing, the work caused such a stir that her tenure at the university was not renewed in 1975. Dr. Welsing then spent more than 20 years as a staff physician for the Department of Human Services in Washington, D.C., and was a specialist in both child and general psychiatry, gaining particular acclaim for her work with young people.

As a psychiatrist, Welsing used Freudian symbolism to explain white supremacy, including the interpretation of guns, money, the cross and gold.

A memorial service for Dr. Cress Welsing will be held from 11 a.m. to 3 p.m. on Saturday, January 23 at Howard University’s Crampton Auditorium.