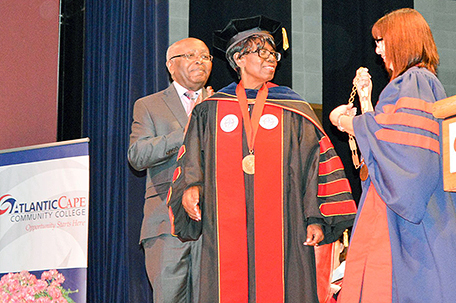 ABOVE PHOTO:  Dr. Barbara Gaba is installed as the first woman and African-American president of Atlantic Cape Community College, as her husband Peter looks on.  Maria Mento, Vice Chairwoman of the Board of Trustees presents her with the presidential medallion.  (Photo: Courtesy of ACCC)

Gaba, who assumed the leadership position at the two-year institution in January, was presented with the presidential medallion by Maria Mento, Vice Chairwoman of the Board of Trustees, at an investiture ceremony at the Walter Edge Theater on the schools Mays Landing Campus, on Friday. October 27, 2017.

“As we celebrate the last 50 years, we move forward and chart our new course — a new path, a new beginning — and I am honored to be at the helm of our next chapter,” said Gaba, who will lead the college’s three campuses in Atlantic City, Cape May County and Mays Landing.

For many the attainment of a college presidency is a goal, achieved by the accomplishment of hard-fought preparation. It is that and more for Gaba, who expressed the opportunity as also a “calling to service.”

“When I see our students, for me it’s personal, because I see myself,” said Gaba.

Gaba received her a master’s degree from Rutgers University and her doctorate from Bayero University Kano in Nigeria.

A native of New York City, Gaba shared her early years. She called raised by her mother, Johnnie Mae Ekpo, who was widowed by the untimely death of her husband. Gaba painted a portrait of a hard-working, God-fearing, single mother, who raised her, and her siblings, in the church and taught them the rewards of hard work, gratitude and helping others.

For Gaba, those lessons have been essential to the trajectory of her career. In memory of her mother, Gaba announced that she and her family created a scholarship bearing her name that would assist deserving ACCC students.

President McMenamin was among one of the many professional colleagues, faculty, students, family and friends who spoke of Gaba’s qualifying professional and personal accomplishments.

“Faculty member Donna Marie McElroy, associate professor of social science, said that when she first met Gaba, she showed a compassion for students that stood out. “I felt that you genuinely cared about people,” McElroy said. “We, the faculty, look forward to your leadership as president.”

There also was Alma Albarran-Martinez, a 2016 graduate, who served as an alumni representative to the Board of Trustees, who believes firm leadership will help the school succeed. Dr. Gaba is not afraid of a challenge, and she’s also not afraid to speak her mind.”

Dr. Ayorkor Gaba, President Gaba’s daughter, provided details about her mother’s accomplishments and commitment to helping others. She also credited her mother’s work and life ethic to her grandmother, “Miss Johnnie Mae.”

“My mother’s relationships are marked by passion, longevity, support and, of course, her holiday card,” Ayorkor Gaba said, sharing a light moment.

Responding to the higher education landscape that is fraught with a range of challenges, Gaba commented, “‘These are challenging times, but they also give us the opportunity to rethink what we are doing.

Among Gaba’s goals for the college is to expand opportunities for its student who desire to continue their education. To that end, she has signed transfer agreements with regional four-year colleges that include Rutgers University, Fairleigh Dickinson University and Stockton University. Additionally, she also has expanded partnerships with area high schools.

To prepare students for the workplace, Gaba intends to work closely with businesses to enhance workforce training.

Gaba and her husband Peter live in Mays Landing. They have two children and two grandchildren.