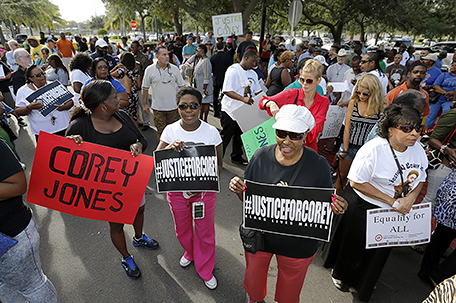 ABOVE PHOTO: Attendees hold signs in support of Corey Jones at a ‘rally for answers’ on Thursday, Oct. 22, 2015, in Palm Beach Gardens, Fla. Jones was fatally shot by a South Florida police officer (AP Photo/Joe Skipper)

Politicians were nearly booed off the stage at a rally when they promised a full and fair investigation into a police officer’s fatal shooting of a black man who played the drums in churches and bands and worked as a public housing inspector.

The crowd of several hundred people gathered Thursday at Palm Beach Gardens City Hall to call for justice in the killing of 31-year-old Corey Jones and they grew restive when Palm Beach County Mayor Shelley Vana pledged the probe would provide answers.

“We do care and the bottom line is, this county must come together in love, peace and transparency,” Vana said. “We as county commissioners believe every life matters.”

Many in the crowd were far from convinced that the Palm Beach Sheriff’s Office and the top prosecutor, Dave Aronberg, will do a thorough investigation into the actions of Palm Beach Gardens Police Officer Nouman Raja. The investigation is likely to take months. A police officer hasn’t been charged with a crime in the county for shooting someone in the line of duty since the early 1990s.

The Rev. Sylvester Banks Sr., a well-known local pastor and Jones’ grandfather, said the community will be closely monitoring the case and its outcome.

“Just because one policeman corrupts himself, is it right for the rest of the police force to cover it up?” he said to the crowd.

“If he has done wrong, let him face his wrongdoing,” Banks said.

Jones was shot to death early Sunday by Raja, who stopped his unmarked van to check on what he thought was an abandoned vehicle along Interstate 95 and was confronted by an “armed subject,” police have said. Jones had a gun he had legally purchased, but family attorneys said they were told by investigators that he never fired a shot.

Details of exactly what happened have not been released by police. Raja’s van didn’t have a dashboard camera and the department’s officers do not wear body cameras, the chief said.

The Jones shooting has plunged his family and the community at large into the ongoing national debate about police use of force, particularly in cases involving African-Americans. At the rally, people wore “Justice 4 Corey Jones” T-shirts and many carried signs making reference to other police shootings of black people around the country.

“This is really only the beginning,” said Howard Williams, a local activist and friend of Jones. “Do not give up the fight. I’m not going to stop until we get justice.”

Jones was a musician who performed with local bands and had just left a gig early Sunday when his car broke down. A fellow band member tried unsuccessfully to jumpstart the car, then left Jones to await a tow truck along a dark ramp on I-95 in Palm Beach Gardens, an affluent city north of West Palm Beach.

Jones’ family said he may have thought he had to defend himself when Raja approached.

Jones was running away at some point, but there’s no evidence he was shot in the back, Crump said. His body was found 80 to 100 feet from his car.

Jones had the gun because he had expensive drums and other equipment, Crump said.

Raja, 38, didn’t have any disciplinary actions or complaints since joining the Palm Gardens force in April, according to records. He previously worked seven years at the Atlantis Police Department, another small city in Palm Beach County. Police haven’t said what race he is.